3 Lazzarini Stratosfera Concept Is a Luxe Bubble That Sails, Flies

5 The Manta 5 XE-1 e-Bike Hydrofoil Is Changing the Face of Water-sports
Car video reviews:
Up Next

Aesthetic considerations should never take precedence over function, and the marine industry is the perfect example of how these two can coexist. Look no further than the latest hyperboat from Persico Marine, the absolutely gorgeous and high-performance F70.

Persico F70 by Pininfarina, the Very Stylish Hyperboat That Flies

The Persico F70 is a dual-purpose yacht, created by Persico Marine in collaboration with Carkeek Design and Pininfarina Nautical. It is a daysailer and racing foiling yacht that performs spectacularly whether you use it for leisure or race it in regattas. First teased this summer, the final design was introduced on October 28, 2021, with plans to build it.

F70 is not your typical yacht, and it was not designed to be so. It is “ultra-fast” but also very luxurious, provides easy maintenance and smooth operation by a minimal crew, and can stand its own against other racing vessels. It is a top-tier in every way, from design to performance, so one imagines that only the most discriminating (and affluent) sailor will end up owning it.

Unlike many of the concepts that make headlines in the industry, the Persico F70 was not made to remain confined to the virtual paper it was drawn on. Persico has plans to build it at its own shipyard, using the latest proprietary robotic technology and only in-house made components. The foiling technology on it is similar to what is being used in America’s Cup AC75 foiling monohulls, arguably the fastest and most advanced racing yachts in the history of the event.

“The goal is to deliver an innovative concept for owner drivers: a stylish, simple, strong, safe and highly competitive foiling yacht, offering a seamless transition between day sailing and racing sailing modes,” Persico says in the official announcement.


So what exactly makes the F70 platform so impressive? For one, it’s a sailing rig featuring a furling mainsail of 190 square meters (2,045 square feet). Secondly, it features retractable foils, which allow it to “fly” on the water at very high speeds. Persico stops short of putting exact numbers on the estimated performance, but it does say that full flight mode can be achieved with as little as 10 knots of wind.
The number of foiling yachts and boats is on the rise right now. More affluent seafarers are asking for the feature, as it allows faster sailing with minimal resistance and, just as importantly for the eco-warriors, minimal damage to the shorelines because there is no wake. The F70 platform banks on the foiling trend, adding extra luxury and the bonus of a sailing rig to achieve flight mode.

The foils on the Persico F70 retract into the hull when they’re not in use, so that docking or port maneuvers are not an issue. When in motion, advanced performance control systems guarantee safety and reliability even at very high speeds. According to the shipyard, the F70 remains as nimble, safe and reliable “in all conditions and angles,” whether it’s being used for leisure cruises or for racing.

Persico F70 is 21.4 meters (70 feet) long, and has a beam of 5.2 meters (17 feet) and a draft of 4.5 meters (14.8 feet). It weighs only 10,000 kg (22,046 pounds) and features plenty of carbon fiber both on the exterior and within. Operations could be run by two to four crew members, and optionals would include AC and anchoring system. Standard specs include a crew area including sleeping, dining and toilet facilities, a guests area with the same kind of amenities, fresh water tank and water maker.

As renders in the gallery show, the interior design is worthy of a sci-fi movie: you get plenty of exposed carbon fiber, LED highlights, and minimalist furnishes with an emphasis on function. They still look good, but you can tell they were made to be functional first and foremost. “The interiors are open space with a series of structural rings, creating a perspective illusion that emphasizes the length and width of the boat and expresses a dual passion for daysailing and racing performance,” Persico says.

When an owner with a matching dual passion for day-sailing and racing comes along, we can expect more specifics on the F70. 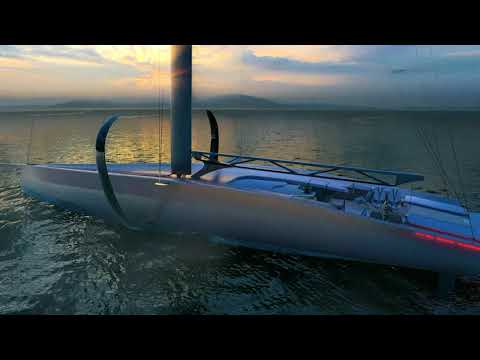 Boxabl's Casita Is the Prefabricated Abode of the Decade: Unfurls Its Magic for Just $50KSee all coverstories