4 Are You Going as Dieselgate this Halloween?

VW Golf with Rusty Finish Looks like Two-Face, Is Perfect for Halloween

1 photo
Those who have already planned a Star Wars weekend filled with spooky sounds and Chewbacca costumes probably know what a Snowspeeder is. The airspeeder became famous during the Galactic Civil War for its use by the Alliance to Restore the Republic as a military fighter. This kid won’t conquer the Universe with his spacecraft, but his father sure crushed his mother’s heart.
The cockpit features positions for a forward-facing pilot and a rear-facing cargo manager, but in real life nothing will be carried with this thing. Instead, all the kids will most likely want to take a ride with it anyway, not to mention they’ll probably want a helmet too. There might not be a magnetic harpoon and tow cable to control repulsorift flaps, along with the high-powered thrust nozzles, but the design couldn’t get more accurate.

One the other hand, the real-life snowspeeder in question does come with some type of gunner which can be manually shot. It’s the perfect Halloween costume, and the fact that the boy's dad manually built it makes it a lot cooler.

“We turned Jeremy's wheelchair into his very own snowspeeder from The Battle of Hoth from the Empire Strikes Back! Working flaps and the guns shoot glowing Nerf darts loaded with glow sticks!” These two don’t need to race for the parents of the year, and it’s safe to say they’ve won that prize already.

Now, since the parents have already covered their son’s costume, we took the liberty to guess what the adults would wear for the holiday. If the mother will most likely choose between Princess Leia or perhaps even Wonder Woman, we’re thinking the best costume for the kid’s dad is this Stormtrooper we’ve stumbled upon. The costume is available online, and it comes with attached foam armor pieces, boot covers at feet, two-piece PVC helmet and padding on the interior of the helmet for comfort. 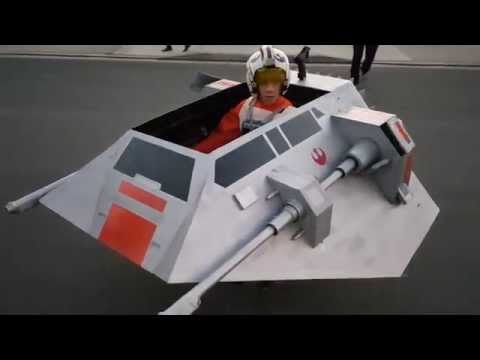