3 The Stolen Jaguar I-Pace Saga Continues for Journo, Plays Out Just the Same

5 Akon Got His Range Rover Stolen at the Gas Station After He Left It Running
Car video reviews:
Coverstory

That feeling after your car has been broken into can range from infuriating to debilitating, and perhaps the thought that there’s nothing you could have done to prevent it is the most powerful. But some California residents believe they have a way to prevent car break-ins, and it ironically involves leaving everything open.
6 photos

Recent figures cited by Newsweek and Inside Edition (see the video at the bottom of the page) reveal that the number of car break-ins has increased. Newsweek says that 2021 has seen a spike of 32% in thefts from vehicles, and of 25% in vehicle thefts, compared to the previous year. California, in particular, is currently caught in a wave of rising crime, including looting from stationary vehicles and stores.

So, what do you do to deter thieves from breaking into your car? The answer is not what authorities have been saying all along, namely to not leave anything of value, either in sight or hidden, in the car and to lock everything up when you leave. It’s the exact opposite: leave everything open so thieves can see there’s nothing to steal.

Last week, a photo posted to social media by Oakland-based photographer Quil Robinson went viral. It showed two SUVs parked side by side, with the trunks wide open and no owner in sight. According to the photographer, this is a “thing” in the Bay Area, as it’s the only resource left to discourage thieves from smashing the windows to search for valuables inside.

Not surprisingly, police are urging against this unique method. Former San Francisco Police Department (SFPD) Deputy Chief Garret Tom says opening the door to thieves is literally opening the door to more trouble. “There’s so much that can go wrong here,” he tells Newsweek, from thieves stealing documents in the glove box to vandalizing the interior to taking the battery or the entire car itself.

SFPD public information officer Adam Lobsinger echoes the sentiment. This isn’t how crime prevention works; people should just make sure they leave nothing valuable in the car and that it’s locked up. Should a break-in occur, they must report it to the police and thus contribute data to the identification of crime hot spots, which, in turn, leads to more police action in that area, Lobsinger explains.

Meanwhile, one of the owners of the cars in the viral photo says she wants thieves to know that she has “nothing to hide” and nothing they could possibly want. 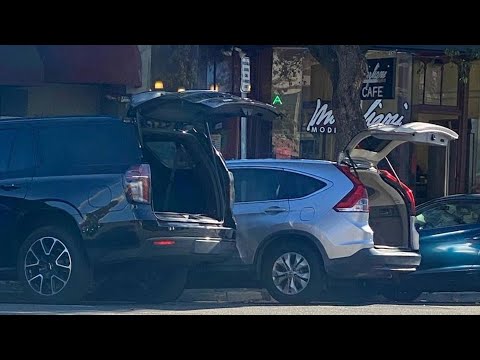