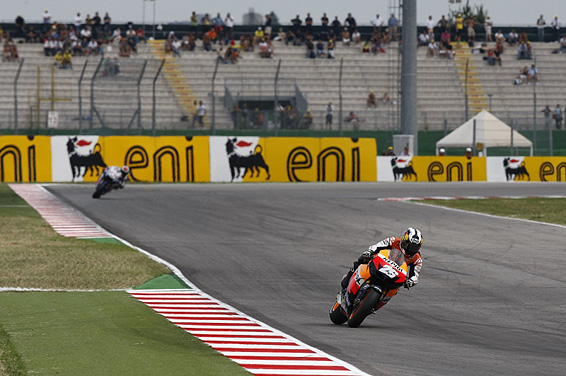 With five races remaining and 63 points behind series leader Jorge Lorenzo, Honda Repsol rider Dani Pedrosa managed to finish first in yesterday’s race at the Misano Circuit. His win, however, was sadly shadowed by the death of Japanese Moto2 rider Shoya Tomizawa, who died from his injuries after crashing during the race.

“There are no words to say how it feels after this victory – it feels like nothing. I arrived at parc fermé very happy with the win and I immediately felt that the atmosphere among my mechanics was really strange, everybody was serious. Still with my helmet on they told me about Tomizawa and I couldn’t react. It was a big shock, a big contrast for me. I asked three times if it was true because I couldn’t believe it,” stated Pedrosa after the race.

Pedrosa led from start to finish and has finally finished 1.9 seconds ahead of Lorenzo (2nd) and Valentino Rossi (3rd). The victory gave the Spanish rider his first back-to-back success in the premier class, following his win at Indianapolis last Sunday.

Pedrosa received the news of Tomizawa’s death as soon as he returned to pit lane, so he took no joy from his success. In fact, all MotoGP riders were told of Tomizawa’s passing after they had finished their race, and reacted with great shock and sadness.

“The whole weekend has been perfect: good practices, a very high pace during the race, and the second win in a row and the fourth of the season,” continued Pedrosa. “I want to keep my feet on the ground though and just concentrate on one race at a time. The feeling on the bike is very good now and my goal is to continue in this way. But to be honest I’m not really thinking about that at this moment.”