1 Toyota Prius Driver Pulled Over for Starlink Dish on the Hood, Surprised

2 Better Stick With NFTs: Artist to Sue for Fraud Over Invisible Sculpture

5 Vin Diesel Would Totally Do a Fast and Furious Musical
Car video reviews:
Up Next

It has long become clear that we need to move to cleaner, more sustainable means of transport, both for personal and public transportation. This was probably on no one’s mind, but here it is either way: a bicycle-powered passenger car.
8 photos

The team behind the Life 0D channel, which bears the brief but oh-so-accurate description “Automotive Shenanigans,” came up with the idea of seeing whether they could get a car to move under the power of a couple of pairs of legs. Not Flinstones-style, but close enough. To that end, they welded an Autobike tandem bicycle into the engine bay of a 1989 Honda Civic Hatchback, installed a pulley drive from the bike to the axle, and took it out on the town.

Unlike the many instances of misuse in the video below, they “literally” took it out on the town. Rolling at a blistering speed of 2 mph (3.2 kph) and holding up surprisingly well despite the massive overhang and the weight in the front, and considering this was deemed a rushed, stupid job from the get-go, the contraption made it all the way to the local McDonald’s.

Along the way, it earned applause, elicited laughter and kudos, and got everyone talking, filming, and gawking—except for that one Karen who drove by and yelled at the trio (two men on the bike in the air and one at the wheel of the Civic, steering and shifting) that they were dumb. They even got serviced at McDonald’s Drive-Thru, which was a blessing since one of the riders seemed close enough to pass out from the effort.

On the way back, the Civic was pulled over by a cop, who seemed as confused as anyone in their right mind would be. However, after being told that the “contraption” was legally “a really big bicycle,” he decided to let them go without a ticket.

So here is proof that a used and abused Honda Civic makes for a very green machine with some imagination and enough sense of humor to put a stupid idea into practice. It might not be a mean machine, but it’s green, alright. 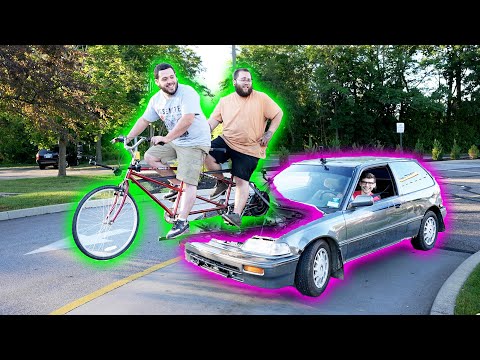