5 Nardo Gray or White Lambo Urus on RDBs? That Is the Forged CF Widebody Question!
Coverstory

Can anyone imagine how much a Ferrari SF90 Stradale costs that even the owner of a highly-profitable aftermarket shop who dailies a Lambo Urus thinks he would need to sell the house and all his ‘merch’ to buy one?

Well, it does not matter to the one percenter. Just to think about how much some folks trust the RDB LA experts or simply do not care about the money they throw out the window, in this episode of the channel’s YouTube vlog, they disclosed that one of these Ferraris came to them straight from the dealer. Yep, the client did not even see the car first, and all those Ferrari goodies were thrown inside a bag…

Alas, even among all those ritzy six-figure rides, a Ferrari SF90 Stradale still counts as a rare apparition. So, how about two of them, dressed in contrasting Pearl White or Matte Black attire? And with crimson or black interiors, by the way, just in case one needs any more details. Unfortunately, these two are just the latest addition to the big pool of cars that await their transformation – RDB has so many of them the guys have started ‘fighting’ over parking spaces.

Anyway, as far as these two Ferrari PHEV sports cars are concerned, they are about to get treated to subtle mods like wheels, wings, and a bunch of other stuff. Until then, of course, the guys took the chance to present them as they were – one slightly modified already with aftermarket wheels that will be dropped in favor of new ones, and the other with 49 miles on the odometer!

That is not a bad roll call, especially for someone who loves a Prancing Horse or two. As a reminder, the SF90 Stradale was launched back in 2019 as the two-door Berlinetta (coupe) or retractable hardtop convertible that would deliver a 4.0-liter twin-turbo and three electric motor PHEV blow to the Lamborghini Aventador’s heart (which, by the way, only now will get succeeded by something electrified).

The result was a 986-horsepower (1,000 ps) supercar, featuring enough electric range to play the sustainable game and also silently allow for monster shenanigans when the ICE oomph is needed – such as that one time when Vik, our resident RDB LA host, showed the steering wheel’s LED rpm warning light. As for alternatives, let us face it – the rest of the guys were quite true to their hearts when dubbing these as ‘dream cars.’

Alas, we shall wait and see what the future holds, especially now that Ferrari has also entered the ultra-luxury super-SUV game with the 715-horsepower Purosangue. Perhaps we will soon get to witness a before and after feature with a pair consisting of the cool, legacy-style SF90 Stradale supercar and the new SUV ‘kid’ on the ritzy block.

Until then, do consider that RDB LA is not shying away from the outrageous SF90 build ideas, either. That Verde Francisca Ferrari SF90 was not tucked inside one of their recent podcasts for nothing. And the teaser is more than enticing for many of the channel’s fans – who were actively trying to guess the exact nature of the upcoming modifications. To no avail, though, as these folks know how to keep a secret when needed – even if they do not look the part of hush-hush (that’s a LOL moment for connoisseurs) agents. 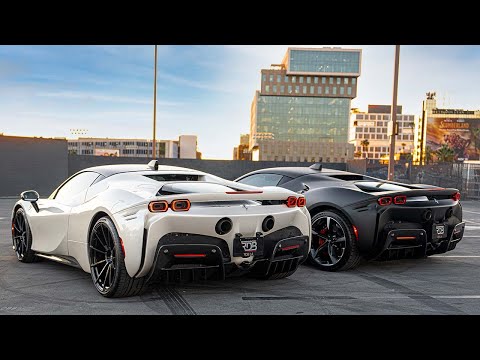