2 360-Ft Emission-Free Superyacht Is a Floating Garden of Eden, Up for Sale as NFT

5 The World’s First Megayacht, Lady Moura, Reveals Its Secrets After 30 Years
Car video reviews:
Up Next

As most people may know, the yachting industry is absolutely booming as of late. To get a good understanding why, take the recent sale of the world’s first megayacht, the Lady Moura.

Readers who keep up with yachting news are aware that the year 1990 saw the world's first megayacht launch, the Lady Moura. If you’ve never heard of this vessel, not a problem, but it is an important one to note, to say the least.

Initially, the plans were drawn up from the mind of its future owner with the expertise of naval architect Luigi Sturchio, the one and the same that has worked on Feadship, Benetti, and Baglietto naval yards. Once the plans were drawn up, it was time to get the blueprints to a yard capable of constructing this 105-meter (344.5 ft) jewel.

The yard that ended up completing this build was none other than Blohm + Voss, a German engineering and shipbuilding company that dates its history all the way back to 1877. It was their expertise that put all the pieces together in the process, building a vessel that would become the milestone for years to come.

30 or so years later, in 2020, after continuous ownership, the Lady Moura was put up for sale. Yes, some unknown owner has put this gem up for sale. Asking price? Just $125 million (€106.6 million at current exchange rates) …I’m sorry if you spilled your drink, but don’t pour yourself another as there are a few more surprises along the way.

Now, the team responsible for brokering this deal was destined to be Camper & Nicholsons (C&N), as if any other team would be trusted to broker such a vessel. Why do I say this? Hold the milk: C&N has been brokering yachts since 1782…this means the firm is just six years younger than the United States; talk about a solid business model.

Not enough for you? Well, aside from the fact that the asking price for this ship was $125 million, part two of the story is that it was considered the quickest flip in the past decade, having sat around only for 554 days before finding its new owner. According to C&N, this deal is also considered the largest yacht sale by any brokerage house since 2019. So, what was bought?

Well, you already know the size of this sucker, how about some of what’s inside for new owners. Aside from an interior worthy of the next James Bond Movie, if one hasn’t been shot here already, only 26 guests can be housed aboard. However, those 26 people will be living it up surrounded by marble walls, wood and carpet flooring, and some of the most stylish lighting I’ve seen in some time.

Guests will have the luxury of enjoying an indoor pool with two diving boards and retractable roof, while a game room for children to keep busy is also available. More adult-like activities include hanging out at the spa, fitness center, or the beach club, the latter of which, with its mind-blowing platform design that allows guests to soak up sun suspended while cruising over the sea.

Outside, guests can lounge on any of the countless beds and chairs or play some games on the helideck. Something Lady Moura features that was a first for the industry is the midship toy and tender garage with room for jet skis and other craft.

For accommodations, a full beam master suite with two bedrooms, a VIP suite, and ten additional suites will take care of all guests aboard. Honestly, the best way to describe the rooms in which owners and guests will rest their heads is to not do so at all, but rather urge you to check out the gallery; you won’t regret it.

The ship and guests will be taken care of by 72 crew members, so you know that the new owners are living it up in maximum style and luxury. However, half of the crew is bent on keeping Lady Moura fit by dedicating their time to operations and management.

This also leads us to the next benefit of this ship, and one of the reasons as to why it possibly sold so fast, a reduced maintenance cost and great fuel efficiency. Because the ship has a dedicated crew, some of which have been with the ship for 28 years and counting, most issues can be fixed in-house by able hands, and fuel flow is monitored around the clock to ensure the highest efficiency possible; near half the operating costs of modern yachts this size.

If anything is to happen aboard as you’re cruising the 12,000-nautical-mile (13,809-mile) range Lady Moura can offer, two medical centers with trained staff are available. Two galleys and two laundry rooms are also part of the schematics as the ship can be stocked with provisions for a three-month trip. This time span is possible as, hold the milk, the Lady Moura also features a certified sewage treatment plant.

While some folks may have been worried about spending $125 million on a yacht that’s been around since 1990, the fact that Lady Moura has seen a refit by its original builders, Blohm + Voss, in 2017, and multiple upgrades in 2019 through 2020, is sure to have been a key factor in finding this vessel a new owner.

Honestly, it was probably several factors that sold the Lady Moura. Truth is, until the silent owner tells the world what he or she liked about this craft, we’ll never know the whole truth. However, the images speak for themselves. 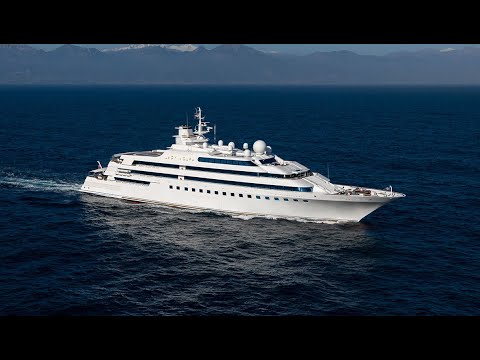