Paul Teutul Jr. Gets Married, Goes to Court Against Sr. 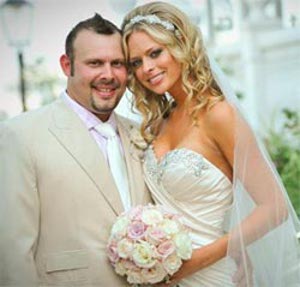 Leaving aside for the moment the legal battle he has with his father, custom bike builder Paul Teutul Jr. made the big step last weekend and married Rachel Beister, his girlfriend, at Bonnet Island Estate in Bonnet Island, New Jersey, in front of some 135 people close family and friends.

According to Right Celebrity citing people who attended the event, Paul Sr., despite being invited missed the wedding for obvious reasons. This didn't stop the couple however from making the wedding a one in a life time event, having spent $28,000 in flower arrangements alone. More will probably be revealed in a future TLC show.

Separately, the third episode of the new American Chopper: Senior Vs. Junior aired on TLC, with both Pauls heading to court on national TV to settle their dispute. As you know, Paul Teutul Sr. filed a lawsuit against his son in December last year, saying he had an agreement to purchase the stock Paul Junior held in OCC.

“I don’t know if it’s about money, if it’s about power… in a nutshell, he demands my share for zero,” Paul Jr. said in the episode.

Last week, we brought you the results of the work Paul Jr.'s new company, Paul Jr. Designs, has beeing doing for the last months. The two bikes, unveiled during the 70th anniversary of the Sturgis Rally, have caused quite a stir among our readers. More details about the bikes and what people are saying about the father-soin battle can be seen by following this link.