2 Foldable Vello Gravel Bike Looks Built on the "If It Works, It Isn't Stupid" Principle

3 France Is Giving Out Up to €4,000 to Its Citizens if They Trade Their Cars for Bicycles

5 Sold Out Barolo i/0 Gravel Bike Sports a Fazua Drivetrain and Trades You Joy for $6,000
Coverstory

With the versatility they can bring, gravel bikes have grown to be one of the most sought-after two-wheelers. While looking for the machines you can be proud of owning, I've run across Patrol and their CG700, a gravel cruncher with a few tricks up its sleeve.

Folks, the CG700 is nothing more than a gravel wonder designed and built by a cycling crew with quite the background in off-road biking, Patrol. According to singletracks.com, Patrol is a crew from Indonesia that was formed as a "spin-off" brand of United Bike, which is another Indonesian brand and one with a history that dates back to 1964. Well, here we are, several brands and decades later, starting down the tubes of the CG700, a bike that's meant to showcase just what Indonesia can achieve in terms of building a solid bicycle.

One thing you need to consider whenever we explore the abilities of a bicycle is the terrain it's designed to be ridden on. Considering this CG is a gravel bike, there are certain traits you need to watch out for, and one of these is the frame design. If you didn't know, this bugger is built using carbon fiber, and that seems to be the right material for a gravel bike as bumps and vibrations from the road are typically taken up by the frame and not the rider; a sort of buffer, if you will.

Nonetheless, as able as carbon fiber may be under these circumstances, Patrol decided to also add a suspension fork to the front of the CG. Yes, a Fox Factory 32 Taper Cast suspension fork brings 40 millimeters (1.6 inches) of travel, perfect for further softening roads. A pair of Pirelli tires bring more plush riding. Sure, you won't be flying down mountains with this bike as it's supposed to have both tires on the ground as often as possible, but for long treks on backroads, it comes off as just right.

However, Patrol does boast a rather hefty history in the MTB game, and some of that experience is seen in the shape of components like a Fox dropper post and a Shimano SLX cassette with an 11-42T range. Good for climbs and grabbing some speed as you start rolling downhill.

Diving further into all that is the CG700, one trait that future owners can look forward to is its ability to handle some cargo bags. Why is this trait essential? Think about it: if you plan on riding further than your legs can take you, you'll want to bring outdoor gear, allowing you and your riding partners to camp out under the stars. The next day, pack up and head home with your stomach filled and bones rested.

Now, I understand that feeling this bike through a phone, tablet, or computer screen is difficult, so let me throw a few numbers at you. Depending on the size of bike you ultimately select, you're looking at a 70.5-degree or 71-degree head tube angle, a seat tube angle of 73.75 degrees, and a reach of up to 390 millimeters (15.4 inches). A standover of up to 742 millimeters (29.2 inches) is also part of the magic for the most prominent bike, slightly dropped compared to other gravel machines.

So, how much is all this magic going to cost you? Honestly, that's a piece of information that I had trouble finding; it seems that Patrol want you to give them a call and get your ear chewed off by a sales agent. You can, however, hunt one down in some local shop and take it for a spin first. That way, you'll know if you should put in the time and energy to obtain a seemingly capable gravel bicycle. 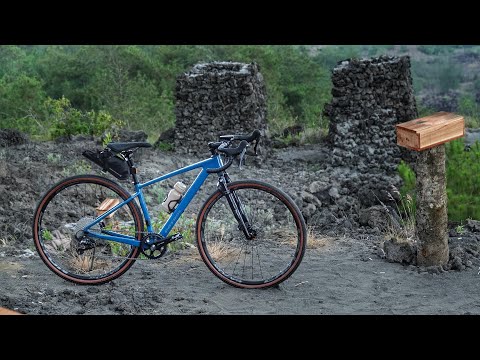