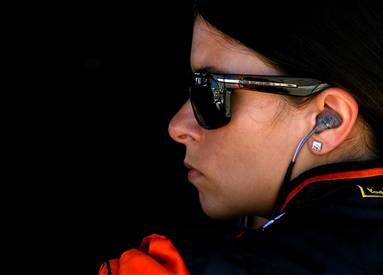 While admitting that she will take the spring off NASCAR racing in order to commit to her Indy Car programme and only after that do some selected rounds in the NASCAR Nationwide Series, Patrick did confirm she will make the start of the ARCA RE/MAX Series Lucas Oil Slick Mist 200 on February 6 at Daytona International Speedway.

For that particular outing, but also to get used to stock car racing prior to her NASCAR debut, Patrick conducted some three days of testing on the Daytona track during the course of last weekend. If the Friday session was influenced by rain, the Saturday and Sunday outings were quite successful, as argued by Patrick herself.

After three days of testing, she went out to record the 14th best time of the Daytona meeting, out of more than 60 contestants. Given her close-to-zero experience in stock car racing, her initial performance was considered a huge success by both herself and her crew chief Tony Eury Jr, with whom she'll compete at JR Motorsports in Nationwide events throughout the next summer.

“Well I can finally say I have really run a stock car and that I enjoyed it even more that I thought I would! This is going to be a fun year!” were Patrick's first words on her twitter page, following the aforementioned test.

“She's spot on. We can go back and look at the changes we've made and look at the data and its reading right what she's saying. She's got an awesome feel, she knows what is happening with the car and she relates it really well,” added Eury Jr, according to Autosport.com.

Patrick recently told the media that she won't do the season opener in the Nationwide Series this year (at Daytona) because most of the Sprint Cup drivers will use the opportunity to test their reflexes prior to the Sprint opener at the Florida track during the N'wide event. Instead, she'll debut in the series when she'll be ready to, and go against regular N'wide drivers later on.