5 1955 Tri-Five Chevy Has Turned Into a Twin-Turbo 540CI Merlin Engine Wizard
Car video reviews:
Up Next

Boy, where do we start with this one? We could do it from the front as there’s vintage written all over it. The side is also great, showing advanced signs of patina and a few of the hand-built details that inspired the owner. Or we could start from the rear to check out the extreme widebody look and hint at the fact we’re not dealing with a little 845cc (just 51.6ci) engine with “no horsepower” sitting in the back.
55 photos

Taking a look at the surprise and enthusiasm on Shawn Davis’s face for his latest episode on the AutotopiaLA YouTube channel, we’ve already excused the fact he knows nothing about this “oddball” French car, even though Renault’s Dauphine was a strong rival for the legendary VW Bettle back in the day.

It even came with the same everything in the rear arrangement, but it was water-cooled instead of air cooled like the Beetle and those lovely Porsche 911s of old. On the other hand, this former desert car (still has the original paint, according to the story from the 1:18 mark) has little to do with its French origins, aside from the fact that its general styling was kept, probably for pure laugh and shock values.

And this project has been entirely hand-built by the owner himself, a very relaxed Volkswagen aficionado who combined the little French ride with his fabrication skills (basically he only used the Dauphine’s shell, the rest is his own doing) and the aforementioned love for German sports cars.

As such, he turned it into one of the most creative rides we’ve ever witnessed on this channel, a Dauphine that from the 2:25 mark doesn't show a motor under the hood but a cantilever suspension, battery, and the fuel tank. Yes, we know the usual peek should be made in the back this time around, but even there, you’ll have trouble spotting the engine.

That’s because the swapped 2.8-liter naturally aspirated VR6 (snatched from a VW Golf GTI along with the six-speed transmission) sends out around 235 to 240 horsepower from the midship position. And don’t think little about the power level, considering the classic car was as lightweight and thin (not very safe, though, hence the full roll cage) as possible.

Besides, although this thing easily rips (those 215 and 235 tires also help) in just about any situation, you’re also going to hear it from afar, thanks to the engine-series characteristic soundtrack, which has landed it the “Wookie” call sign for pretty obvious reasons. Those can be experienced at the 3:14 mark or just about any point during the drive part, which kicks off at 5:15.

Does anyone also need highlights with this thing? Well, if they’re a must, we could pinpoint the “hippie rugs” from the cockpit, the fact it looks massive even though it’s about the same width as a 2003 Golf or the modern dashboard that’s actually a Samsung tablet... 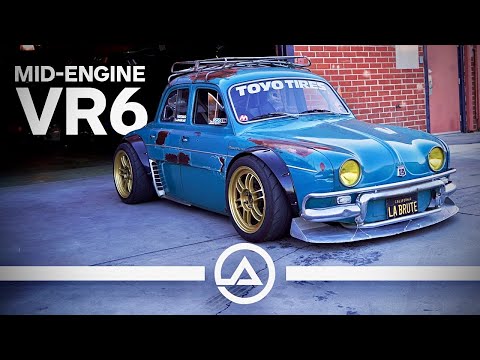