2 Paris Hilton Drives Kim Petras to the VMAs, in Yet Another Bubblegum Pink Car

4 Paris Hilton’s Former Mercedes-Benz SLR McLaren Gets $34,565 Worth of Servicing

In less than three weeks, Paris Hilton, the original influencer and celebrity socialite, turns 40 years old. Now a married woman, she is ready for the next stage in her life and career, and it predictably involves NFTs and moving the party to the digital realm.
6 photos

Paris Hilton, alongside Matt Damon and Reese Witherspoon and a slew of other celebrities, was recently named by Forbes one of the 50 most influential NFT personalities, and she’s living up to that reputation. At the end of last year, she launched her own island in the metaverse – Paris World (duh!) on Roblox, where guests can visit, party, and buy clothes from her closet, all of it virtually, in exchange for real, non-digital money.

This week, she’s launching the first of her series of NFTs. She is also one of the most famous celebrity collectors of these pieces of digital art, having bought some 140 of them. Non-fungible tokens are one-of-a-kind digital assets on the blockchain, and they’ve become a status symbol among proponents of the technology. The Bored Ape NFT, for one, is particularly popular right now: Paris got herself one, as did Jimmy Fallon.

Paris was on Fallon’s show the other night, for what Forbes describes as a very awkward exchange over their ape NFTs, one that perfectly sums up the disconnect between NFT believers and skeptics who call it a pyramid scheme. Equally awkward was the historic moment in which Paris announced that she was gifting everyone in the audience, including Fallon, a copy of her own NFT, which is yet to drop. It’s a partnership with SuperPlastic, a company that deals in vinyl toys and digital collectibles, and it’s actually a digital version of a photo collage that Paris made herself.

The collage, which comprises photos of Paris and her now-husband Carter Reum, took her six months to put together and is called “My Forever Fairytale.” It’s basically your teenage-years’ collage of pics of your first love, but turned up to the level of art, because this is Paris we’re talking about. SuperPlastic then took it and turned it into an NFT, and now everyone in the audience owns one.

Uproxx notes that audiences at the show had to be told to applaud and “oooh” and “aaah,” because they were confused and “bored to tears” about the giveaway and the interview. Reactions on Twitter aren’t any more favorable, with some even saying that, if they happened to wander onto the set where Fallon was shooting his show and they were handed the Paris NFT, they would sue. Talk about the contrast between enthusiasm and skepticism over NFTs.

Controversy aside, though, this is a historic moment, and it belongs to Paris: the world’s first televised NFT giveaway. Iconic, as she would say. It’s also a glimpse into the future, because Paris believes the metaverse is “the future of partying.” 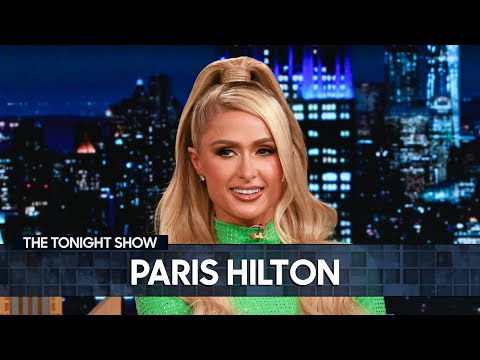