4 Stop The Presses: Did Paris Hilton Buy The First Huayra Roadster in the U.S.?

5 Wealthy Heir of Hilton Family Reportedly Steals A Bentley, Gets Arrested
Car video reviews:
Up Next

Some celebrities have incredible, very tastefully-done custom rides. Others go for the added dose of extra, like Paris Hilton and JoJo Siwa. Put Paris and JoJo in the same driveway and you get the “CEOs of being extra.”
5 photos

Paris Hilton and her many cars are the stuff of (urban) legends. In her many years in the spotlight, the 39-year-old heiress slash socialite turned world-famous DJ has made a habit of matching her outfits to her custom cars, and of switching them more frequently than some of us change our bedsheets. No judgment here.

JoJo Siwa is very similar to Paris, despite the fact that she’s 22 years younger. The 17-year-old singer and actress rose to fame on Dance Moms but has since become a star on her own, and an influencer to boot. She has the fleet to go with this reputation, with her latest garage addition being a Tesla Model X.

Last November, YouTubers Kyler and Madison Fisher customized JoJo’s Model X with a wrap with hundreds of JoJo faces and a technicolor interior that combines rhinestones and tech to deliver the ideal ride for a still-teenager who makes money off her childish persona.

One month later and without any connection, Paris wrapped her $165,000 BMW i8 Roadster in a holographic materials, as a tribute of some sorts to the Dolls Kill outfits she wears at Burning Man. When you’re as rich as Paris, you don’t choose the clothes that go with a particular car, that’s for peasants and amateurs. You customize a car to match your fave outfits.

This week, Paris and JoJo met at Paris’ home, aka the Slivington Manor in Beverly Hills, for their own take on Fashion Week, which was streamed live on TikTok. This meant that Paris’ Sliv-Mobil got to share the driveway with JoJo’s Tesla, and Paris seems to agree that the latter is way more outrageous.

“Oh my god, your car is epic!” Paris gushed. “Like, I thought the Sliv-Mobil was cool. This is literally so incredible. This is something I would do. I love it!”

If you’re feeling particularly resistant to annoyance today, available below are several videos: one with the moment in which the two cars sat side by side, another one with JoJo taking delivery of the custom Tesla (and here’s to hoping you don’t mind screaming and shaky shots), and a third that shows a better look at the Sliv-Mobil. 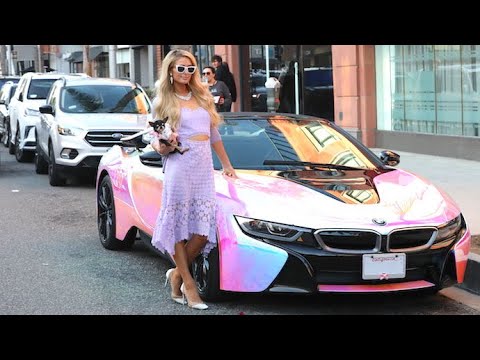