4 Five Minutes of the Best Sounding Car Ever: the V12 Pagani Zonda

You Can Actually Drive the Bugatti Chiron This Summer, but There’s a Catch

The first time I remember seeing a Pagani Zonda in action was circa 2002. I was watching Top Gear at home, and episode 1 of the relaunched series was on TV. Back then the Stig was a brand new idea, and he was wearing all black, as opposed to the white overalls that most people know him for. The Zonda was almost 6 seconds faster than the Murcielago around the Top Gear test track.

Pagani Zonda Revolución Is Terrifying Yet Amazing to Drive

About five years later, I stumbled upon a video on Youtube, which was still sort of new at the time. I will never forget the sound of the AMG-sourced V12 roaring inside a tunnel in Monaco. I must have seen that video over 1,000 times and it never gets old. But it was the launch of the Zonda R that made me go insane over the Italian brand. Posting a Nürburgring lap time of 6 minutes and 47 seconds was nothing short of amazing, and it happened 11 years ago.

The Zonda R, much like the Ferrari FXX and the Maserati MC12 Corsa, is part of a class of cars that few human beings will ever get to drive. I've been fortunate enough to at least see one on display at a trade show in Italy. Davide Cironi, an Italian who has made quite a name for himself by driving and presenting some very special cars recently, was allowed to get behind the wheel of a Zonda Revolución.

Having driven cars like the Bugatti EB110, the Ferrari F50, and the Pagani Zonda F, I was dying to see his reaction. I'm not saying that I don't like the Pagani Huayra, but for me, the Zonda Revolución is the pinnacle of Pagani's brilliance. We are talking about a car that's fitted with a massive 6.0-liter V12 engine, that comes with just under 800 horsepower and 538 lb-ft (730 Nm) of torque.

This car makes use of a carbon-titanium central monocoque, which plays a key role in keeping the overall weight down to 2,359 lbs (1,070 kg). To give you an idea of how insane that figure is, just imagine that a 1998 Mazda MX-5 is only about 10 lbs lighter than the Revolución. Five of these cars were built in total, which makes them even rarer than the "standard" Zonda R. With that in mind, it's no surprise that it came with a €2.2 million ($2.6 million) price tag, taxes not included!

Davide is driving the car at Imola, one of the coolest race tracks in Italy, which is also less than 1 hour away from Pagani Automobili. I've been doing media work at Imola in the past, and you should consider going there the first time you're around Bologna. With 19 turns in total, the track is 3.050 miles (4.909 km) long. The best thing about this video is that Davide isn't going slow at all. And we get to see and hear the Revolución in all of its V12 glory.

From the moment he hits the first corner, he is shocked at the level of grip this car provides. With so much aero and technology on the car, that's not surprising at all. You may be shocked to know that this car comes with a 12-stage traction control system, which can be adjusted according to each driver's preference. You can imagine how loud this is just by the fact that you can barely hear the driver, even though he's got a microphone inside of the helmet.

Davide's reaction to the car seems to be similar to that of Jeremy Clarkson. Jeremy noted that even though you'd expect Zondas to drive more like spaceships, they're easy to take around the corners. And Davide further emphasizes that: "the steering, the frame, the torque of this engine gives you such confidence! I could never have imagined that to be the case on a car like this!" As he's going through the gears, it's obvious that he's experiencing a wide range of emotions, ranging from fear to excitement.

With all of the rare cars he's driven so far, he still can't believe he has been allowed to drive the Revolución. Seeing him go flat out to the top of fifth gear is enough to have your back hair stand up. But he still uses caution before entering turn one, braking earlier than you would during an official race. "I have too much respect for Horacio and this car to go faster than this". We don't get to see an official lap time, but that wasn't the purpose of today's exercise. Watching this video did push me to try out the car in Assetto Corsa, and after almost 5 laps I managed to get a time of 1:49.923. But the world record for this car in the game is about 10 seconds faster! 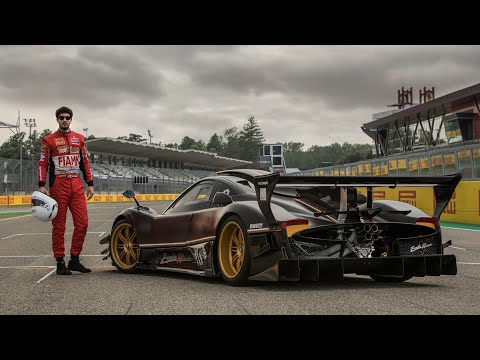