Pagani Zonda 760 Roadster Is Yet Another Special Edition Model

Even though the Pagani Zonda has been officially out of production since 2013, people seem to still be hypnotized by the looks and performance of this supercar. The 760 Line seems to be especially popular due to a couple of reasons we won’t get into right now.
1 photo
A special edition 760 Roadster was just spotted in London at Topaz, a retailer known for its bespoke services. This is also the first time we’ve seen the Zonda in this body style and it’s looking absolutely stunning.

Just imagine how good you’d have to feel driving this beast with no roof over your head, listening to the majestic 7.3-liter AMG V12 engine in the back, knowing that you have 760 HP to play with. That’s right, this ultra lightweight car has plenty of power to go around. It’s not called a supercar for nothing...

Since this seems to be just about the only such car in the world, the maestro himself, Mr. Horacio Pagani came down to the shop, to make sure that the car was well taken care of. It was a bit too much if you ask us as the guys were only applying a protective film on the car’s body prior to being delivered.

So, who’s the owner of this thing? Well, we don’t have a clue but he or she must be loaded and asked that the initials imprinted throughout the car be censored when filming it so that complete secrecy is kept.

But who cares anyway? The best bit about this car is that it has a manual gearbox. Do you know who else has a stick shift in his Zonda? Formula 1 champion Lewis Hamilton. The thing is, Lewis knows how to handle so much power but we’re not sure about the owner of this roadster, however... 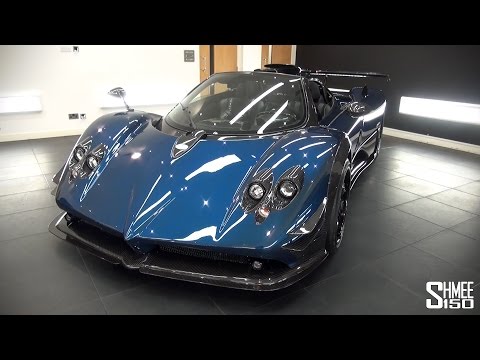