1 CV-22 Osprey Looks Massive During Landing, Hard to See As a Subtle Infiltrator

4 F-16 Fighting Falcons Lurking in the Dark Look Peaceful, They’re Anything But

5 F-35A Lighting II Seems to Melt Mountain Peak As It Flies Over Tacoma
Car video reviews:
Up Next

If you are in the mood for some military airplane action in the sky, there are a lot of aerial shows still planned for this year to choose from. Not all of these shows will treat you though to a sight as rare and priceless as the one we have featured here (click main photo to enlarge).
19 photos

What you’re looking at is a gathering, in the middle of the sky, of three generations of America military aircraft. We’ve got the World War II-era P-51 Mustang, known in its circles as the Moonbeam McSwine, the scary 1970s-era A-10 Thunderbolt, and sandwiched between them one of the most modern aircraft currently fielded by the U.S. Air Force (USAF), the F-35A Lightning II.

All three were flown during the 2021 Thunder over Michigan Air Show at Willow Run Airport last week. The Mustang was piloted by Heritage Flight Foundation pilot Stuart Milson, the A-10 by Captain Haden Fullam, and the F-35 by Major Kristin Wolfe. All three incredibly skilled pilots who made this stacked formation flight both possible and safe.

Just to give you an idea of how hard pulling off such a stunt was, consider these differences between the three airplanes. The Mustang, getting its power from a single Merlin engine, generates 1,490 hp and can move thanks to the forward-mounted propeller at speeds of 362 mph (583 kph).

The Thunderbolt moves thanks to a couple of General Electric turbofan engines that can push it along a tad faster, at 420 mph (676 kph). The top predator, the F-35A, uses the most powerful Pratt & Whitney fighter engine presently available, capable of zipping the airplane through the air at speeds of Mach 1.6 (1,227 mph/1,974 kph).

So, three completely different airplanes, coming from three different ages, coming together at the same time alongside the U.S. Air Force Thunderbirds and the U.S. Navy Blue Angels – must have been an incredible show in Michigan, and you can experience snippets of what went on there in the videos attached below. 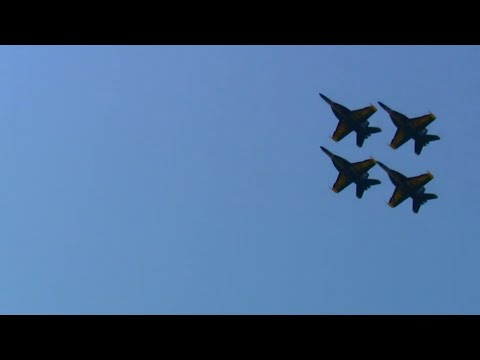 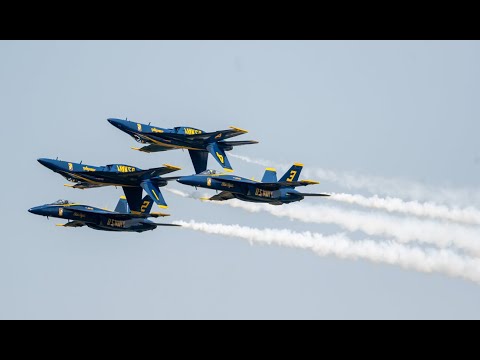