2 DJ Afrojack May Wake Up in a Bugatti Chiron Soon

Owning a Bugatti Veyron Doesn't Come Cheap, Here’s How Much It Actually Costs

Gabriel Nica
The Bugatti Veyron wrote history when it came out back in 2005, but today it doesn’t look as fierce as it did initially. It’s only normal when you consider that a decade passed in the meantime and technology evolved at an incredible pace.
1 photo
Then again, it still remains the fastest production car in the world, thanks to its Super Sport edition that can reach speeds of well over 400 km/h (248 mph). As you can imagine, in case you didn’t know, achieving that kind of velocity does require incredible performance.

That’s why the Veyron has an 8-liter W16 quad-turbocharged engine delivering 1,001 HP in standard guise, sending them to all four corners of the car. The Super Sport has 200 hp more on top of that and is about 100 kilos (221 lbs) lighter on its feet, but in both cases, the figures are absolutely stunning.

The purchase price is $3.2 million in California, for example, but you can’t get a new one anymore, as Bugatti has ceased its production in the wake of the unveiling of their new hypercar, the Chiron. Yes, it’s expensive but the purchase price is only part of the type of money you’ll need to spend to maintain it in working order.

Taxes add up to around 10 percent of the purchase price which, in this case, translate into $320,000, as the man in the video below explains. Then there’s one thing you’ll have to change regularly and there’s just no going around it.

We’re talking about tires and these are tailor-made for the Veyron to withstand the high speeds this car can reach. Care to guess how much they cost? $30,000 for the set. To make things even better, you should know that they can only be changed three times before you also need to swap the rims.

The reason for that is that the tires need to be glued onto the rims so that they don’t slip during hard acceleration spurts. That’s why, you can only use the edges three times before you can’t glue anything to them anymore. Replacing the whole shebang costs $120,000.

One thing there’s no mention of is the fuel that must be taken into consideration, especially since this is no Prius in this regard. Official numbers claim that the Veyron can do 7 mpg around town or 33.6 l/100 km, but the real figures are a lot worse. In that case, you can take this expenditure into account as well, as it does add up over the course of a year.

All in all, we’re guessing this shouldn’t be an issue if you can afford to spend over $3 million on a car, right? 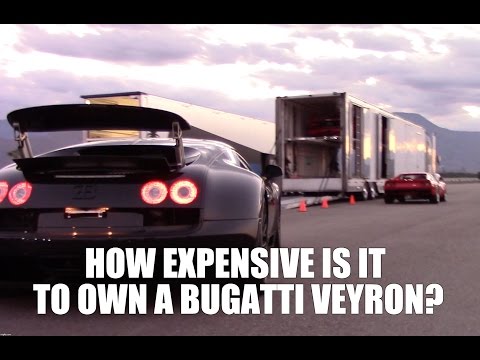