2 Bachelor Party Ends With One Barge Underwater, Another Crashed, and a Third on the Run

4 There’s a Giant Inflatable Borat Floating Around on a Barge in Toronto, London

Owners Say the Jumbo Kingdom Floating Restaurant Did Not Sink, the Plot Thickens

If this were a TV daytime drama, this week’s report that one of the most iconic Hong Kong landmarks and the former record holder for the world’s largest floating restaurant would have been the perfect cliffhanger.
8 photos

The plot thickens around the Jumbo Kingdom Floating Restaurant. Towed out of Aberdeen Port in Hong Kong and en route to an unknown location, it reportedly encountered bad weather when passing Xisha Islands, capsized and sunk at the bottom of the South China Sea. The bad news came straight from owners Aberdeen Restaurant Enterprises (ARE), in a statement that said that water flooded the vessel and tipped it over. “The water depth at the scene is over 1,000 meters [3,300 feet], making it extremely difficult to carry out salvage works,” the statement continued.

It’s true, the word “sunk” was never used, but that was the direct implication. As such, reports both in the national and international media said that Jumbo Kingdom Restaurant, once part of the larger structure of Jumbo Kingdom, and the largest, at 260 feet (80 meters) and three decks, had sunk and was a complete loss.

Not really, no. Prompted by the Hong Kong government to offer an explanation and the exact circumstances of the incident, ARE is now saying that the vessel is not lost. In a statement to CNN, ARE says that both the vessel and the tugboat are “still in the waters” off the coast of Xisha Islands. The company is refusing to acknowledge the previous statement, but insists that reports that it had sunk are inaccurate.

To The Guardian, ARE says that the Jumbo Restaurant is still afloat. Whether it’s still tied to the tugboat or salvageable is not specified. Neither is its insurance status, with Andrew Brooker, managing director of Hong Kong-based marine insurance firm Latitude Brokers, telling CNN that it’s “incredibly unlikely” that it was, since “the marine insurance market does not like [to carry the risk of] 50-year-old barges being towed across 1,000 kilometers [540 nautical miles] of open ocean in typhoon season.”

The Hong Kong government is saying that it found out about the incident via media and that no official report was filed. Talk about muddying the waters.

Jumbo Kingdom opened in 1976 and was favored by celebrities, public figures and film directors. It consisted of the Restaurant, an older and smaller barge that also served as restaurant, a separate kitchen and a barge for the seafood tanks, and eight ferries for customers. As of 2013, the structure operated at a loss and accumulated over $13 million in debt, and it closed indefinitely at the start of the 2020 international health crisis.

The relocation was meant to help ARE cut down maintenance costs and taxes, with reports suggesting it was headed to a shipyard in Cambodia. 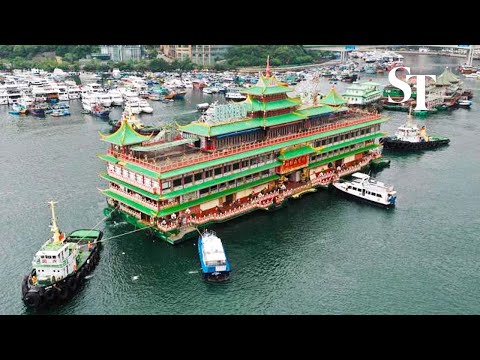