1 Meet Solid CRS-01, the E-Bike Concept That Looks Like It's About To Snap Your Fingers Off

2 This Futuristic 3D-Printed Thingy Is the nFrontier UILA, a Car and e-Bike Hybrid

Cristian Curmei
Less than a month ago, autoevolution featured material on an e-bike that is built out of nothing more than plant-based materials. Oh, it’s also foldable, but it basically makes everyone look like a, well, a clown. This time around, we meet the Ossby Geo’s less hip brethren, the Curve Electric. But ‘less hip’ doesn’t mean less capable, and come to find out, Ossby might just be changing the game.
8 photos

The name Ossby is a relatively fresh one on the e-mobility scene, but it would seem that this Madrid-based manufacturer knows what it takes to grab your attention because the Curve Electric features an idea I haven’t yet spotted on other e-bikes, a fully integrated motor and battery system all nice and wrapped up into one neat package. As best as I can describe it is to compare it to a Fazua with a touch of Bafang, two e-system powerhouses on the market.

The trinket you see in the gallery, as sleek as it may appear, is an e-bike with the battery and motor crammed into one simple housing mounted to the rear hub. Yes, the motor on the rear also features the battery pack in the same space. To lay things out for you, there’s a motor housing, followed by the battery pack, and then the motor. But that begs the question: How efficient is something like this?

According to the Ossby website, one of the particularities of this motor and battery system is that you can achieve a range of up to 70 kilometers (44 miles). That’s more than enough range for daily urban travels and possibly recharging once every two to three days, depending on what you use your e-bike for. All that’s made possible by a 250-watt motor with 10-amp hours of juice in the packs. This mounting of batteries in a motor housing may not be something new – even though it is to me – but it is the sole reason the Curve’s frame can be shaped as thinly as it is.

Speaking of the frame, this hunk of aluminum seems to be doing something else for cycling; it’s as though anything with two wheels, a handlebar, and a motor constitutes an e-bike. Once you throw on those miniature wheels, any adult riding this may look like they took a day off from performing at the circus.

Apparently, there is a method to Ossby’s madness: building a compact and very urban-friendly EV for the everyday human. While small wheels may look funny and are possibly dangerous under the right context, they offer easy maneuverability on sidewalks or crammed metropolitan cities. Ossby seems to also be banking on the fact that you will be riding this puppy in an adult-like manner, responsibly. You shouldn’t be hopping any curbs, riding downhill, or even off-road; there’s nothing in the design that would say otherwise.

The result? Nothing more than an urban-friendly EV that is marketed as being able to accompany you on the metro, an elevator, and up and down stairs. It can even be thrown into your car for a trip to that park outside the Curve’s range. Overall, we’re only looking at carrying around a bike that weighs 13.5 kilograms (30 pounds), so not bad at all if you ask me.

As for the rest of the Curve, it’s built with rather budget gear that yields nylon pedals, the transmission, and the brakes with 140-millimeter rotors. All that is going to cost you as much as €1,500 ($1,500 at current exchange rates), so not very much. Just a little something-something to throw onto your Christmas list. 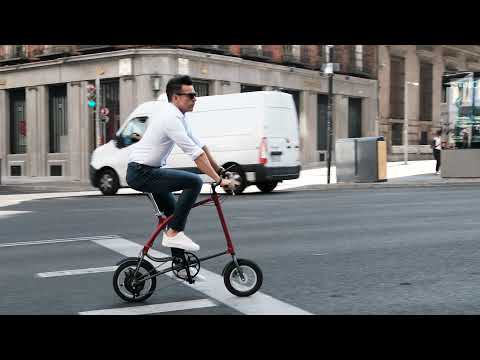