Florida Driver Hits Gas Instead of the Brakes, Ends Up in Someone’s Pool

Orion Spacecraft to Fly on July 2 for Launch Abort Test

A new test for NASA’s Orion spacecraft is to take place at the beginning of July as the agency is moving forward with the implementation of its latest space exploration plans. And this time, it will be a test “under the most demanding conditions.”
1 photo
In March 2019, the capsule went trough a static hot-fire test of the Launch Abort System Attitude Control Motor at the Northrop Grumman facility in Elkton, Maryland. It was the first in a series of three such tests to be conducted in an attempt to prove the worthiness of the capsule.

This time, the Orion will fly.

Fitted on top of a rocket provided by Northrop Grumman, a test version of the Orion weighing 22,000 pounds will lift off from the Cape Canaveral Air Force Station. The combo will fly to an altitude of 31,000 feet (9 km) and reach speeds of 1.3 Mach.

When these two thresholds are reached, the launch abort system will kick in, taking the test capsule away from the ascending vehicle.

This abort system is tested in case crewed missions encounter a problem during launch and an emergency escape is needed.

Such an incident occurred in October 2018, when the Soyuz MS-10 rocket carrying American astronaut Nick Hague and Russian cosmonaut Aleksey Ovchinin to the ISS suffered a malfunction.

The capsule’s abort system kicked in, and combined with the practiced actions of the two men managed to get them both safely back to Earth.

When ready for operation, the Orion capsule will be part of the trinity of spaceships built by Americans, alongside the SpaceX Crew Dragon and Boeing Starliner.

The first flight of the Orion, Exploration Mission-1 (EM-1), will see it fly uncrewed to a point well past our Moon, on a three-week-long journey. It will be spending more time in space without docking to a space station than anything before it. 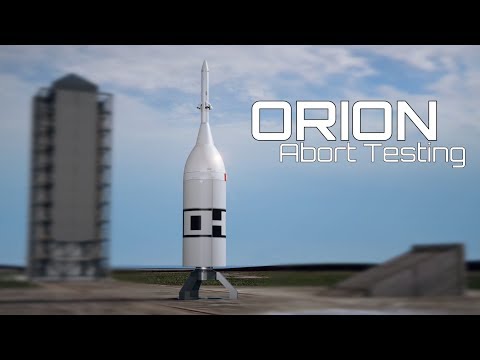