2 Pagani Zonda 760 Roadster Is Yet Another Special Edition Model

3 Embarrassing: Pagani Zonda Won't Start in Cannes, Has to Be Pushed

If there were a Guinness World Record for the supercar with the highest mileage, then this one-off Pagani Zonda La Nonna (The Grandmother) would surely win it by a very long shot.
1 photo
Nicknamed “The Grandmother” by Pagani workers, this is technically the second Pagani road car ever built, but that is far from being its most important feature.

The car was manufactured back in 1998 as a Zonda C12. Pagani fans will remember that the C12 was Horacio's first individual project after starting his own supercar company.

Unlike Paganis of today, the original Zonda wasn't powered by a bespoke engine, albeit its powerplant was also a V12 handbuilt by Mercedes-Benz. Codenamed M120, the naturally aspirated twelve cylinder was the same engine used by the Mercedes-Benz S600 (W140), CL600 (C140), and SL600 (R129).

With 394 hp and 570 Nm (420.4 lb-ft) of torque, it had more than ample power for a supercar from the 1990s, even though a chipped hot-hatch from today would probably smoke an original Zonda C12 in a straight line.

Keep in mind that only the monocoque and the interior of the so-called Prototype 2, or “La Nonna,” have survived since 1998 until now, but not because everything else broke. No, this exact example was used as a rolling test bed for all the Zondas built until 2013.

Over the years, its engine was upgraded/replaced with bespoke Mercedes-AMG versions that completely changed the model's performance, while most body panels are a mix of the various Zonda versions that were developed over time.

This is how the supercar had amassed no less than 1,1 million kilometers, or about 683,000 miles, until 2013 when it was last seen in public.

The folks from Prototype Zero recently visited the old Pagani factory (a new plant is about to be completed) and came across Prototype 2, looking entirely different than it did two years ago.

The car was apparently restored just in time for Horacio Pagani's sixtieth birthday, which happened on November 10. If you care to see it in action at the hands of the suitably named Pagani test driver Davide Testi, here is how “La Nonna” looked back in 2013, when it had a masculine nickname and had been upgraded to 760 hp. 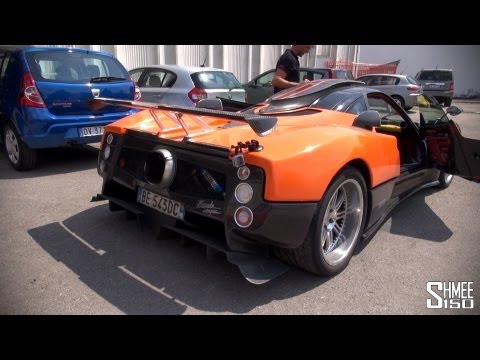