2 Motorcycle Thugs Look like They Need Another Manhattan Brawl

5 Romanian Motorcycle Cop Dies After Plunging with Bike in Huge, Poorly Signaled Pothole
Up Next

Dacia Duster Gets Custom Triangular Tracks for Wheels, Seems to Enjoy Them

Florin Tibu
It's been a long, hard court battle for Oregon motorcyclist Justin Wilkens, but he prevailed. It took him no less than four years to obtain a final ruling of the court and damages after being rammed into police officer Robert Edwards, back in 2012.
1 photo
Edwards, then a police lieutenant in Venta, XOregon, chased Wilkens in an unmarked car and without using the siren. The motorcyclist was speeding and made multiple illegal overtakes, while Edwards trailed along. The car reportedly had hidden lights.

Wilkens, on the other hand, seems to be unaware that a cop is following him, and doesn't appear to try to lose the car. From experience, we know that a skilled rider on a superbike can outrun a police cruiser with ease, especially when the pursuit takes place on a busy road.

If you're patient enough to watch the video, you'll notice that the biker is not trying to lose the cop behind him, and even makes the passes safely, even though illegally. If you're in for Chuck Norris action and gun point cuffing, skip right to 3:25.
Wilkens stopped and did not oppose any resistance but this was no excuse for Edwards
The motorcycle rider slows down almost to a stop when officer Edwards, now a captain, rams him down. The rider comes back to his feet, but without any aggressive intentions that could, in any way, justify having a gun pointed at him, being kicked then forced to the ground and cuffed.

Now, the problem was that the dashboard camera on Edwards' car was running and it recorded everything. Even more, Edwards' behavior led to Wilkens suffering two broken ribs and a collarbone, plus damage to his motorcycle.

Justin took his case to the court, and declared that he simply wasn't aware that he was being followed by the police. The camera evidence backed his claim and convinced the jury in his favor, while Edwards' lawyers unconvincingly tried to prove that Wilkens' stopping was unexpected and the cop's car suffered from brake fade, as visordown reports.

As to the PD promoting Edwards after the incident, we'll leave this to your judgement. We don't condone Wilkens' riding, but his deeds are far less violent in nature that what officer Edwards did. 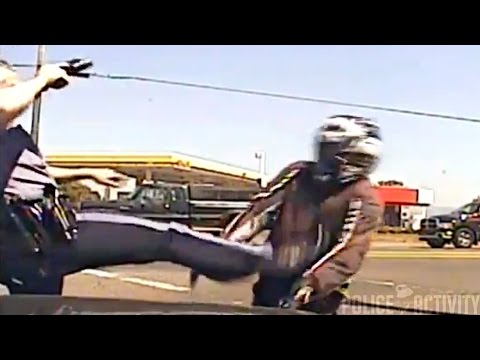