5 Ford Crown Victoria Is an Undercover “Ghost” With Vortech V8 and a Stick Shift
Car video reviews:
Up Next

We are used to a specific type of custom projects from the AutotopiaLA YouTube channel, but this time around, Shawn has brought to our attention an interesting sports car that’s not that old, not that restored, and not that modified. Well, except for the essential parts, that is.
31 photos

This 2008 Chevrolet Corvette of the C6 generation quietly started its life alongside the current owner in the most spectacular way, as the original V8 engine was blown... or rather “grenaded” as the host of the vlog artistically explains. Indeed, the driver managed a decisive coup de grâce with three broken rods “and then a nice slice hole in the block.”

It was all for the best, apparently, because the sports car now has a built LSX under the hood (they pop the hood from 0:55) with a Stage 4 BTR (Brian Tooley Racing) camshaft that delivered a dyno rating (with proof, from 1:15) just shy of 500-wheel horsepower and around 480 lb-ft (651 Nm). Remember, this is a naturally aspirated mill, and the owner explains the transmission is still original – though it does sport an upgraded clutch.

Before going into the exterior presentation (from 2:20), we need to discuss the audible elephant in the room, because this ‘Vette is so loud the owner isn’t permitted access on Laguna Seca – those straight pipes for the custom exhaust certainly have a little something to do with that...

Moving on, we find out that the orange dress is actually peelable because it’s just a wrap. The car was originally silver, and all the black aerodynamic upgrades now provide a great contrast to the orange shade, which also helps with potential beauty marks from track encounters or just plain color boredom.

The 18-inch Signature Performance wheels are another standout feature, and so we move on to the interior bit from the 4:08 mark. There, we see a cockpit that’s tastefully prepared for racing with a full cage, racing seats and harnesses, and even a short-throw shifter.

Of course, we’re not off into the dusk without the customary drive, and Shawn takes the wheel from the 5:12 mark to immediately comment, “that thing sounds nasty” while he wasn’t even out of the garage! Better yet, it even comes with “nice little pops” as the owner explains he likes to drive the car to and from the track... prompting Shawn to conclude we’re dealing with “a total driver's car.” 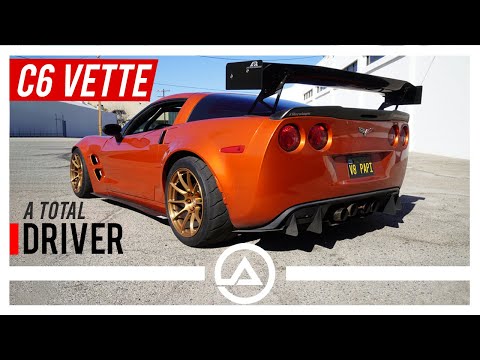