1 Bozzo's Ossa E-Bike Concept Looks Like a Good Idea. Could End Up Being the Worst

2 Nothng E-bike Is Just That, a Simple Ride Designed to Face the Complex Urban Jungle

Disabled riders who can’t use regular bicycles shouldn’t be deprived of the joy of mountain biking. And they don’t have to, thanks to the new Phase AD3 adaptive bike from Orange.
8 photos

Orange Bikes is a British manufacturer renowned for its wide range of mountain bikes. Its new wheeler has been in the making for the last six years. The bike was designed by Orange’s Senior Design Engineer Alex Desmond specifically for Lorraine Truong, a former enduro and downhill racer. Lorraine suffered a brain injury six years ago and was left with a form of soft paralysis that has kept her off her bike ever since.

The Phase AD3 adaptive e-bike is a three-wheeler with a patent-pending design. According to Orange, a pair of cantilever linkage arms join two additional head tubes. A second steering linkage element connects the two suspension forks to the original steering head tube. What this offers is core stability for the rider, as well as the ability to throw the bike around, pumping, jumping, and railing berms.

Unlike traditional bikes, the AD3 uses the rider’s upper body for balance. The stability is significantly improved even in tight turns or at low speeds.

Orange’s adaptive bike is equipped with a Paradox Kinetics eMTB motor. The range varies depending on the rider’s setup, and in this case, the 504Wh battery allows Lorraine to do 2,296 ft (700 meters) of technical climb and around 15.5 miles (25 km) of trail on a charge. A spare battery is also available for an increased range, and it can easily be carried in a backpack. Swapping the battery takes only a few seconds.

Alex Desmond says he will continue to make the bikes on an order-to-order basis, tailoring them to the specific needs and abilities of the rider. The purpose of the Phase AD3 is to offer riders the freedom of tackling challenging trails on a bike that feels like a two-wheeled one. 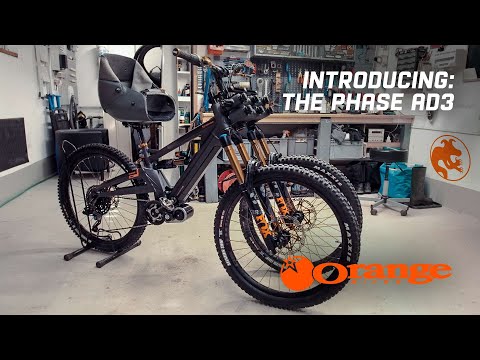