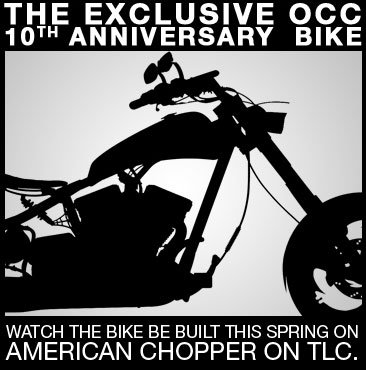 Founder Paul Teutel Sr. chose a quite unexpected way to celebrate the 10th anniversary of the famous Orange County Choppers (OCC), leader of custom made choppers, and partnered with Ducati North America for the new ‘Ducati Hudson Valley’ dealership in Newburgh, New York.

On April 23, a new custom L-twin-powered Ducati Monster 1100 was unveiled, which the fans will be able to see on Thursday, April 30, on an episode of TLC’s “American Chopper”.

"Ducati Hudson Valley will no doubt prove to be a stepping stone in boosting sales and reinforcing Ducati's presence in the Northeast," said Michael Lock, CEO Ducati North America. "Ducati is known for innovative brand tie-ins and we are challenging dogma by exploring creative partnerships like this one with Orange County Choppers. We really looking forward to seeing what they do with the Monster 1100."

The anniversary celebration and the grand opening of the new Ducati dealership lasted four days, until April 26, and among other special treats, its visitors could enjoy live bands, a car show and VIP autograph signings.

If this partnership sounded to you as weird as it did to us, here is what Paul Teutel Sr. has to say about the new idea.

"We prefer to partner with brands that are class leaders so naturally when we were looking to expand beyond choppers, we saw Ducati as a perfect fit. Ducati's global reputation in the Superbike world along with the brand's style and design elements really make this an unique opportunity for us."

But that is not the only surprise Ducati and OCC bring to the industry. The new Ducati Hudson Valley dealership will also be the first of Ducati’s Retail Design Projects to highlight new elements of the Italian brand’s visual corporate identity, such as custom-made ‘bike stands’ incorporating graphics of an 848 on a race track or a Monster 1100 through curvy mountain roads.

According to Ducati representatives, the dealership will also stand as a service area that will feature Ducati’s signature red-and-white paint scheme inspired by Ducati’s MotoGP replica bike, the Desmosedici.