1 EU: No State Funds to Save Opel Factories

Opel Unveils Plan for the Future 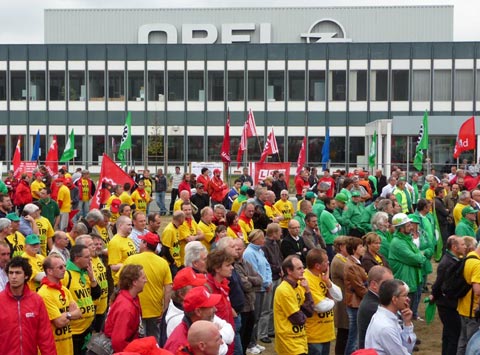 Opel/Vauxhall CEO has just unveiled the so-called "Plan for the Future" that is expected to help the two automakers survive the crisis and even return to profit.

To get straight into details, Opel will invest a total of 11 billion Euros by 2014, with the viability plan requiring a long-term funding of 3.3 billion Euros. GM has already provided 650 million Euros in advanced payments in January and the company is also holding talks with European governments for another 2.7 billion Euros through loans and loan guarantees.

“We will build a European company that is profitable, self-sustainable and fit for the long-term,” Reilly said. “This keeps a manufacturing base in Europe. It is good for Europe, good for our employees and good for our customers. We therefore trust that the plan will be supported by our employees.”

The "New Opel" will bring eight major launches in 2010 and another four in 2011, such as Meriva, Corsa, Movano and Ampera. Additionally, the company will invest another 1 billion Euros for launching another extended-range electric vehicle and expanding LPG and CNG versions of its cars. Last but not least, it will spend the aforementioned sum for introducing pure battery-electric vehicles in smaller-size segments.

“Opel/Vauxhall has a clear vision: to be a leading European manufacturer of high quality, desirable automotive products, based on German engineering, driven by a united team of professionals and respected around the world. This vision will be realized by offering an exciting and expanded product portfolio based on a strategic push into alternative propulsion technology,” said Reilly.

One of the most important subjects is the production cut the company is planning for Europe. As we told you several times in the past, Opel wants to reduce capacity by 20 percent, which would allow the company, at least on paper, to become profitable in 2012.

In order for these to happen, GM will lay off thousands of employees across the continent. Here's the planned job cut for European facilities.


The plants in Ellesmere Port, Gliwice, Aspern and Szentgotthard won't be affected by the job reduction plan. As for sales and administrations areas, here are the countries and the number of jobs to be eliminated: