Opel Insignia Is a Better Sedan Than Peugeot 508 and Mazda6

Mid-size sedans are a great alternative to the family SUV because they cost a lot less, offer better mileage and usually superior handling as well. If you don't want to go for the predictable Passat or C-Class, you might consider cars like the Insignia, the Mazda6 or even the Peugeot 508.
1 photo
This review compares the three models, and if you're a fan of either of them, chances are the outcome will offend you. As usual, Carwow's review starts by looking at the design, and the Insignia is described as the least appealing of the three.

Now, we know some Opel fans who will never agree, but they probably want something with a German badge anyway. The Peugeot 508 is like its polar opposite, with flamboyant looks, to the cost of interior space. As for the Mazda6, it recently underwent a second cosmetic update but isn't showing its age yet.

The French car can annoy some people with the way it tried to reinvent everything. The interior doesn't have that much space, and the plastics lower down are of the scratchy variety. Peugeot wants you to put the steering wheel low down, right next to your lap, and if you don't, it's going to obstruct your view of the digital dials.

As a family car, the Insignia does the best job because its rear seats offer more legroom. The sloped roof in the 508 can be problematic for taller passengers, while the Mazda6's flaw is having a normal trunk instead of a liftback opening.

Nearly all mid-size sedan owners we know enjoy driving and often go on longer journeys. You'd expect the sporty-looking Peugeot 508 to be the best on the road, but it's not. Meanwhile, the Mazda is fine if you ignore the vagueness in the steering wheel. On the plus side, the Japanese 2.2-liter diesel engine is the smoothest and most economical of this test. However, we think the Insignia's mpgs are being affected by its choice of gearbox.

But because it's the cheapest and the most practical, the Insignia is declared the winner of this comparison. Tell us what you think of the outcome, especially if you have any experience with either of the three. 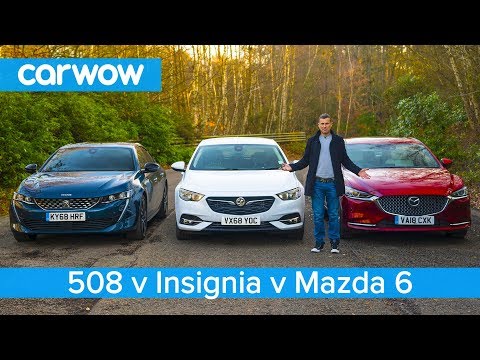