3 Elephants Don’t Really Mix With Rockets. Still, Here’s How Many Would Fit in One

Genesis GV60 Electric Crossover Is a $100K+ Affair in Australia, Will Launch in September

Oort Cloud Comet Heading This Way, Someone Imagined It Impacting the Moon

Home > News > Space Junk
Daniel Patrascu
Space is a dangerous place, not only for the humans going out there to explore it, but even for huge cosmic bodies. Like say the Earth, which is never actually shielded from the cosmic impacts that seem to happen quite often, speaking on a cosmic scale.
6 photos

Despite the serious dangers posed by the asteroids or comets floating around aimlessly in space, our planet hasn’t experienced a major impact in a very a long time now, at least on a human scale. Hopes are it never will, as we’re now training ourselves to fight these space enemies, but we’re far from safe yet.

For most people though, the fact that an 11-mile (18-km) wide piece of frozen stuff will fly by our planet at a distance of 168 million miles (270 million km) is enough to reassure them nothing bad can happen. For others, like the one who put the video below this text together, even that distance is too close.

That frozen stuff would be a comet called C/2017 K2 (PanSTARRS). It was spotted by Hubble back in 2017, as it was moving between the orbits of Saturn and Uranus, being at the time the farthest active comet ever discovered.

An animation video published last week by specialist Hazegrayart shows the comet coming close to our planet (much closer than it will actually be), then for some reason, getting pulled toward the Moon, which it impacts with its full force. You can enjoy all that action below.

As for how to enjoy the real deal, the comet will not be visible with the naked eye. You could spot it though using telescopes or simply by going to the Virtual Telescope Project's page, where a live webcast will be available on the day of the comet’s closest approach, July 14. 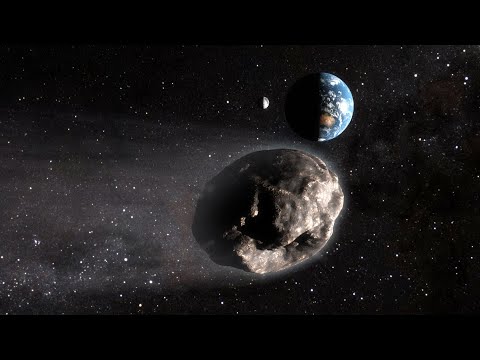