5 3D Printed Acros Gravel Bike Promises to Smooth Out Your Rides With Style
Car video reviews:
Up Next

How far can bicycle technology go? Well, Urwahn Bikes, a team out of Germany, is setting the stage for what could be the next cycling wave to hit global streets, so much that a recent collaboration with the MCM luxury fashion house has yielded just 50 special edition e-bikes up for grabs.

Only 50 German-Engineered, 3D Printed MCM EDT Luxury e-Bikes Will Ever Be Produced

If you’re a regular reader of the material published on autoevolution, then you probably know who Urwahn Bikes may be. If the name doesn’t ring a bell, just know that they’re a German team that has developed an award-winning bicycle design that’s hitting all the right notes in terms of a capable construction. Did I mention that each bike is completed using 3D printing?

Well, after winning multiple awards and grabbing the attention of countless other teams, some of which have nothing to do with the bicycle industry, this crew has collaborated with luxury designer brand MCM and created a bike meant to celebrate MCM’s 45th anniversary. The result, the MCM EDT urban e-bike.

What is the MCM EDT? Simply put, it’s a bicycle that’s been designed hand in hand by the two teams and is meant to not only perform like a champ in urban settings, but to do it with flashy and fashionable style.

To get a clear idea of what’s going on here, it should help to know a bit about how the bike is built and why it’s being sold for €9,499 ($10,960 at current exchange rates). One reason why this bike comes in with a price in the thousands range is partly because its construction is yielded with the help of 3D printing and selective laser melting.

For the bike, a steel frame with genuine copper plating makes this puppy stand out as if you’re riding around on some golden horse; wait until sunlight hits it just right. To top it all off, the MCM Visetos Monogram covers the bike from tip to tail.

If branding isn’t enough to sway your vote, then take that rear triangle as example of why you should at least check Urwahn out. With this feature, the MCM EDT won’t just look cool, but will also offer a soft plush ride as this triangle is meant to absorb vibrations and shocks.

As for the electric functionality behind this bike, another German team is in on the action, MAHLE. Sure, when you first look at the tubing of the bike, you might not think that there are any components hidden inside, however, in the downtube is a MAHLE ebikemotion, integrated battery with 250 Wh of capacity. Overall, this battery is good for up to 80 km (50 mi) under optimum riding conditions. That’s a darn clean tube design if you ask me.

The powerhouse behind this sucker? MAHLE is once again the team of choice with an ebikemotion rear wheel hub motor with 250-watts of power and 40 Nm (29.5 lb-ft) of torque. Sure, it doesn’t sound like much of a powerhouse, but considering this vehicle is meant for urban routes, it should have you zipping along with no issues. Plus, the bike only weighs 14 kg (30.8 lbs).

All that’s then neatly wrapped up with a Gates Carbon CDX belt drivetrain that offers not only a clean look but a low-maintenance system as well. Did I mention quiet? The only thing you should be hearing with the MCM EDT is the sound of your tires gripping asphalt. Somehow, Shimano also wriggled their way into this bike and bring a BL-MT200 hydraulic disc set with 160 mm (6.3 in) rotors.

As for other small details that help raise this bike into luxury standings, you can take the internal cable routing, matching water bottle resulting from a third team on the collaboration, 24Bottles, and a range extender with an extra 208 Wh of electric power, good enough for an extra 60 km (37.2 mi). The headtube also features a running serial number showing the world that you’ve got one of 50 pieces.

Sure, part of the price you pay is because this puppy is a collector’s item, however, if Urwahn keeps these sorts of collaborations brewing, who knows what you may be expecting from the future and how the MCM EDT may grow in value. 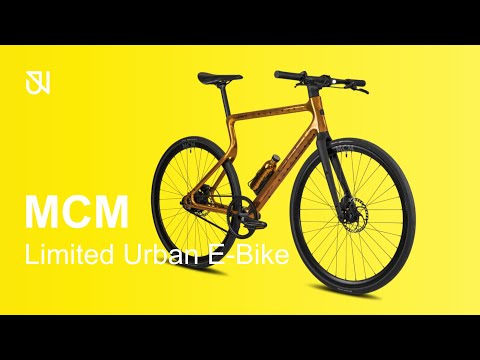