1 Remembering the Clyde James Bug Bike; May Be the Quirkiest Thing You See All Year

Imagine the glorious sound the rider must be hearing with that beefy inhaler placed right under their chin!

Regardless of whether you’re rolling around on two or four wheels, there’s a fair chance that DNA Filters’ catalog will have something to suit your ride. The Greek company traces its history all the way back to 2002 when a fellow named Dino Nikolaidis laid the foundation for what would later become a leading manufacturer of high-performance air filters and intake systems on a global scale.

Under a warm Mediterranean breeze in the late summer of 2003, the firm was ready to start production in a well-equipped 500-sqm (5,400 sq-ft) facility in Athens. They continued to innovate and expand as the years went by, but what you might not know is that DNA will occasionally experiment with the art of motorcycle customization to showcase their expertise.

Given how often we see builders installing DNA products on their machines, it only makes sense for the brand to undertake projects of its own. The entity we’re about to examine was first unveiled at the 2017 edition of EICMA, and it revolves around KTM’s wild 1190 RC8R. In stock form, the donor’s liquid-cooled 1,195cc V-twin is able to deliver 173 ponies and 91 pound-feet (123 Nm) of torque at the crank.

These figures are certainly nothing to sneeze at, but Dino and his son Marios have taken things to an entirely new level. Following their intricate makeover, the unique RC8R you’re looking at here tips the scales at 357 pounds (162 kg) dry, and it can put down 186 hp at the wheel! Well, how’s that for an insane power-to-weight ratio?

Without further ado, let’s see what this father-and-son duo did in order to transform KTM’s 2017 MY titan into the beastly cafe racer pictured above. For starters, the Greek aftermarket architects used CAD software to conceptualize the bike’s new styling elements, with Dino focusing on the front section and Marios tackling the rear.

Much time was spent on nailing the design, but the task that followed was even more demanding. There’s not a single piece of the RC8R’s stock bodywork in sight because the DNA experts had all of them replaced with CNC-machined aluminum garments they’ve fabricated in-house. To craft this mesmerizing outfit, Dino Nikolaidis and his son spent as many as 400 hours at the CNC milling stations.

After they’d somehow managed to sculpt the individual pieces without any errors, the whole ordeal was carefully assembled by means of a TIG welder. You’ll find a custom headlight bucket with LED internals and a new fender hovering above the front wheel, while the rear end is adorned with a caffeinated tail section, thin seat padding, and a two-piece subframe that supports the entire setup.

We’ve saved the best for last, and this pièce de résistance comes in the form of an outlandish 2.9-gallon (11-liter) fuel tank whose structure is downright puzzling. Making use of the OEM fuel pump, the tank features a CNC-milled filler cap and an integrated fuel gauge placed right ahead of the saddle, but it’s the bonkers intake module protruding through the center that’ll draw the most attention.

It boasts DNA’s very own Stage 3 air filtration technology, which is accompanied by a menacing titanium exhaust from Akrapovic at the opposite end of the combustion cycle. Additionally, there’s a grocery list of high-grade KTM PowerParts components, as well as an aftermarket quickshifter and an anti-hopping clutch mechanism.

The RC8R’s electrics are housed inside the custom-made aluminum tail hump, and they’re connected to a bespoke wiring harness. For the final touch, Dino and Marios applied a handsome color scheme that’s mostly monochromatic, save for some tasty orange accents. Lastly, the creature was nicknamed “The Brain Eraser,” perhaps hinting at its mind-blowing looks and performance. 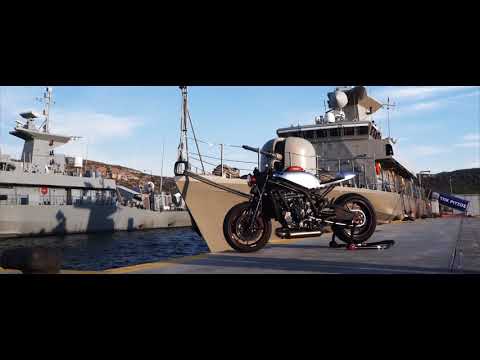