1 When Harry Styles’ Car Breaks Down, He Hangs Out at Fans’ Houses, Feeds Fish

5 Kim Kardashian Is Reunited With Her Sweet 16 BMW, Her Very First Car
Driven

Elena Gorgan
Los Angeles, the city of angels and spectacular police chases. Not many angels showed themselves this week, but we did have one very surprising police chase, involving a one-off, possibly celebrity-owned 6x6 Ford truck.
5 photos

You can see the chase in the video below. It all started when one dude rode his bike to a Ford dealership in Los Angeles, California, threw the bike in the back of a custom 6x6, hopped in and was on his merry way. Police were alerted because he was driving erratically and soon engaged in a chase that ended suddenly, and somehow anti-climatically, when the monster truck smashed into a light pole in North Hollywood.

That said, it wasn’t a measly pole that stopped the truck, but rather a combination of factors. Prior to that, police had tried to perform a PIT maneuver with little success and then deployed spike strips. When the truck hit the pole, it was already running on a flat, so this was the proverbial straw that broke the camel’s back – and got the driver to understand that his joyride was over.

With the man in custody and facing felony evading, possession of a stolen car and DUI charges, the question remains: who owns the truck? Initial reports claimed that it was DJ Marshmello’s F-350-based Velociraptor, which he got last year as a gift from manager Moe Shalizi – a $550,000 gift, to be more precise. According to CBS Los Angeles, Shalizi had dropped it off at the dealership for servicing, and the folks there left the keys in the ignition.

The same media report notes that Shalizi half-confirmed it was Marshmello’s truck by posting video of the police chase on social media. Several other outlets are also saying this was the truck in question though, to be sure, it seems to be sporting a different wrap than the one the artist showed off last year, instantly recognizable by the decal with his own name on the door.

The different wrap could be a clue that this is someone else’s custom ride. CNET Roadshow’s Daniel Golson, for one, believes this is the truck the Diesel Brothers built for SEMA 2019. Photos posted to social media show distinct similarities between their Ford F-550 and the one that got taken for an unwilling joyride by a possible drunk cyclist.

Regardless of who owns this 6x6, we have a feeling they will be looking for a different dealership for servicing from now on. 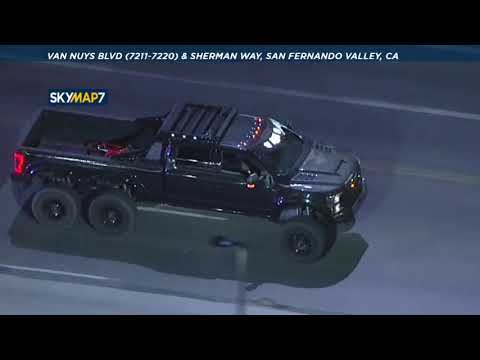 I think it might be this exact Super Duty that the Diesel Brothers showed at SEMA last year... pic.twitter.com/JpKZ1WKh7D