2 Chris Brown Shows Off in a Bugatti Veyron

One of the Five Veyron Pur Sangs for Sale 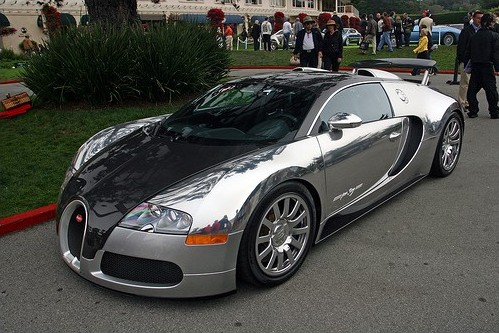 On 10 September 2007, a special version of the Veyron called the "Pur Sang" (French "pure blood") was unveiled at the Frankfurt Motor Show. The only difference from the standard Veyron was the body finishing: the Pur Sang had none, revealing the Veyron's pure aluminium-carbon fibre body.

Now, one of the five Pur Sang five cars ever produced, which all had high-gloss aluminium wheels with a diamond cut finish, is offered up via global online luxury marketplace JamesList, Luxist reported.

Only one material was used for every component of the car, such as titanium, magnesium, aluminum and carbon fiber. Thanks to the carbon fiber construction techniques, the monocoque of the EB 16.4 Veyron Pur Sang is not just especially light, but extremely safe.

The monocoque is also able to dissipate crash energy through elastic deformation. Moreover, between the aluminium used on the body shell and the one used inside the Veyron are no different degrees of gloss, because a single, special alloy was utilized, the AlMgSi 0.3 Vitral 42.

The vehicle got its name after the French racing driver Pierre Veyron, who won the 24 Hours of Le Mans in 1939, while racing for the Bugatti company.

The Veyron features an 8.0L W16 engine, fed by four turbochargers and develops no less than 1,001 horsepower. The transmission consists of a dual-clutch Direct-Shift Gearbox computer-controlled manual gearbox with seven gear ratios, with magnesium paddles behind the steering wheel and a shift time of less than 150 milliseconds.

The car’s top speed is listed at 407 km/h (253 mph). What is really interesting is that when the car reaches 220 km/h (140 mph), hydraulics lower the car until it has a ground clearance of about 8.9 cm, while the wing and spoiler deploy.