1 Avanti Was Made for Pure Indulgence at Sea, It Can Cruise for an Entire Month Straight

4 Floating Entertainment Center Vianne Can Be Yours for $9M, Has a Helipad and Jacuzzi

5 This Fresh $40.4 Million Benetti Luxury Yacht Is Made for Those Who Want the Best
Car video reviews:
Coverstory

Superyachts are among the most coveted assets worldwide, and sometimes people are capable of crossing the line just to get one. Other times, they can become associated with the scandalous affairs, like major debts or hidden fortunes with suspicious backgrounds, depending on their billionaire owner’s profile - in which case, it’s perhaps a wise decision to part with them sooner than later.
12 photos

One of the most luxurious megayachts currently listed for sale is the gorgeous Valerie. Built by the well-known German shipyard Lurssen a decade ago, at first glance, it seems to be the typical luxury yacht, perfect for extended exotic vacations. And it is, but there’s also an interesting story behind it, where finances and international politics blend.

Rostec is one of the most powerful names associated with Russia, as a giant state corporation and a military-economic complex that oversees the production of Russia’s most important army vehicles and assets. You can imagine that the CEO of this corporation is one of the wealthiest and most influential people in the country. Indeed, Sergey Chemezov is considered one of President Vladimir Putin’s closest allies.

Media sources have revealed that Chemezov owns the Valerie megayacht indirectly, as one of the assets belonging to his stepdaughter, who is the formal beneficiary of an entire network of offshore companies. These assets have been estimated to add up to $400 million, with Valerie alone worth $140 million at the time of its purchase. Chemezov himself even had to face an asset freeze back in 2014, when Russia was hit with international sanctions, but after things were cleared, Valerie was spotted in several exotic locations.

The 279-foot (85 meters) vessel, with a six-deck structure and a lavish Art Deco interior, was designed by the famous Espen Oeino International and Reymond Langton. It can accommodate up to 17 guests, and some of its main features include a helipad, a luxurious spa with a hammam, and a large sundeck with a 19.6-foot (6 meters) pool. An elevator connects all the decks, and a wide range of water toys is available for its guests. With a 6,000-nautical mile (6,909 miles/11,110 km) range and a 12.5-knot (14 mph/23 kph) speed, Valerie is ready for transatlantic cruising.

The Russian millionaire’s “unofficial” superyacht now has a $113 million (€101million) price tag, and it comes not just with top-level amenities but also a gray past. 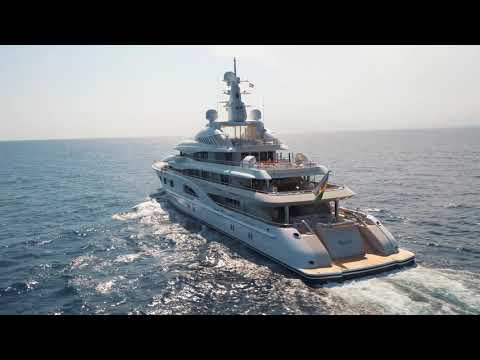