Produced between 1978 and 1983, so for a rather short period, the second-generation Z Car a.k.a. the Datsun 280ZX or Nissan Fairlady Z still managed to attract legions of fans with its reworked styling and continued performance combined with affordability and reliability. Diehard aficionados of the series can’t go wrong with such an example, particularly when it comes with a neat collectible status.
58 photos

Does the tan over maroon paint job and graphics pack make this Datsun 280ZX particularly attractive to fans of the famous series? No wonder, since according to the Garage Kept Motors description, this consignment is just one of four that originally left the delivering dealership back in Houston, Texas, almost four decades ago.

It brings the looks that were inspired by great sports cars of the era, the great performance that became a staple of the Z Car range, as well as lots of reliability and almost pristine looks. After all, this example also comes with less than 60k miles on the odometer (an almost round figure of 58,888 miles/94,771 km to be more precise) to signal it was cared for with tender love while traveling less than 1,550 miles (2,494 km) on average, per year.

Basically, the tan metallic 280ZX we see here up for grabs for a mere $29,900 had its burgundy graphics package applied at the original selling dealership to make sure it will easily stand in any crowd, even some four decades later.

Inside, it’s a 1980s car through and through. Those rear-window black louvers don’t block too much of the sun, and the 280ZX shines bright with its striking red upholstery. Better yet, the velour bucket seats look great and don’t seem to mind the passage of time. Just like the Dolby-enhanced stereo cassette player, we might add.

As far as mechanicals go, the 2.7-liter inline six-cylinder sitting under the hood purrs like a kitten in the video embedded below. It’s mated to a properly classic five-speed manual transmission. Sometimes it’s best to go for respectable dealerships over the craziness of no-reserve auction, and this is probably the case here. 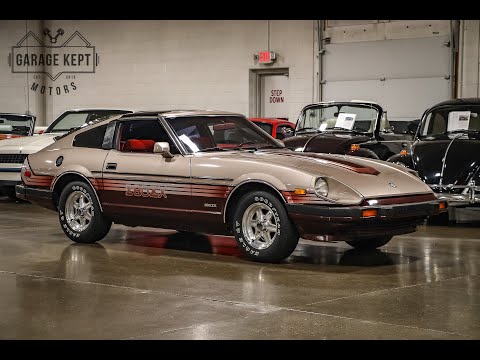