One Joyride in Dad’s Range Rover SVR, and This Kid Had All His Stuff Given Away

Elena Gorgan
Kids have done and will always do stupid, dangerous stuff. Some parents may choose to deal with it by reasoning with the kid, but one family in Phoenix opted for tough love. Of the strangest kind.
14 photos

Their 14-year-old son Angel (an angel only in name) took the family’s Land Rover Range Rover Sport SVR out for a joyride around the neighborhood when they were out of town. Since mom and dad were in Vegas celebrating their wedding anniversary, what better way for Angel to have some fun than take the car out for a spin?

Angel, being 14, isn’t legally allowed to drive, but he didn’t let that stop him.

According to Fox10Phoenix, the parents found out about his little adventure right away, because police called them. They rushed back home and were most likely hoping they’d get a reasonable explanation for why he’d taken the car out. They got instead the most hilarious excuse you can imagine: Angel told them he’d hand-washed the car and thought driving it around the neighborhood would help dry it off faster.

You have to give the kid points for creativity. His parents didn’t feel the same way, so they decided that the proper punishment for him would be if he had everything taken away from him. Absolutely everything, from the furniture in his room to his clothes and shoes.

They stripped bare his bedroom and moved everything to the curb, where Angel sat for hours, waiting for people to come and pick up the stuff, for free. Based on the video at the bottom of the page, they also called the media, so as to shame him properly.

At the end of it, everything went. Even good neighbors love a bargain.

Angel’s father says this was his way of apologizing to the neighborhood for Angel’s dangerous behavior. “Mostly to apologize,” he explains. “We're neighbors as well. He could’ve run someone over. Something really bad could’ve happened.”

Either because he’s on camera or because he really feels the same way, Angel agrees: the punishment was the right one. 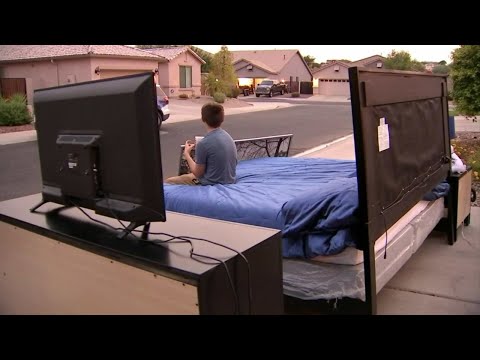