With the 2023 Nissan Z sports car fast approaching the moment of first deliveries, the heat is on for Toyota GR Supra aficionados to prove the rival’s mettle. However, a new “A90” quarter-mile world record will do for now.
8 photos

P2uned is one of the many aftermarket outlets out there in America. More precisely, they’re located in Winchester, Virginia, and specialize in fabrication, carbon fiber, dyno with a focus on Audi, BMW, and Supra performance parts. So naturally, to prove their worth, they also like to play with demonstrators.

Chief among them would be their “one-eyed” white and black Toyota GR Supra. Sporting front cookie cutters and chunky rear wheels/tires, it’s obvious this “A90” is destined to live and die one quarter-mile at a time. And it’s going to enjoy itself every time it does so, whether it wins or loses.

We haven’t found too much information regarding the build itself, but we can safely assume it’s been morphed into a forced-induction herald. An improving one, judging by the evolutions at major events. If you look at the videos embedded below, the first one is an Instagram post related to the car’s evolution at the Haltech World Cup Finals Import vs Domestic event.

The GR Supra was eliminated from round one, despite posting an impressive 8.72s ET against the derelict Civic’s “sleeper-mad” 8.36s pass. No worries because the occasion for swift dragstrip vengeance arose just as quickly. So, during the next major outing, the videographer behind the Drag Racing and Car Stuff caught another tale of GR Supra vs. front-wheel-drive Honda Civic.

And this time around, even as the little hatchback initially took full command of the race with a faster jump off the starting block, it soon understood resistance is futile (or some engine troubles arose). Thus, it dialed back the throttle and allowed us to focus on the GR Supra’s new “A90” world record pass of 8.53s at almost 163 mph (262 kph)! 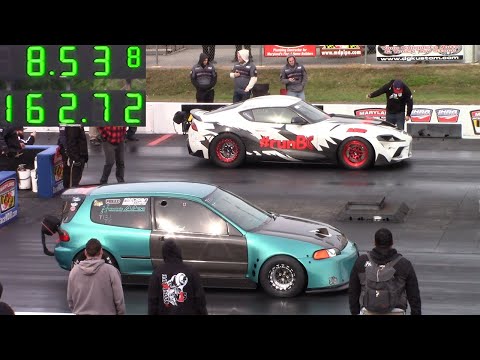