1 VinFast Reports Customer to the Police for Complaining About the Lux A2.0 Online

4 Driver Completes Multi-State Journey With Zero Visibility, Except for a Peephole

5 Voltswagen Prank Was All About “Let’s Show the World How Crazy We Are About EVs”
Car video reviews:
Coverstory

It’s ok to want to show off. It’s not ok to do it at the wheel of a brand new, very expensive and powerful supercar, like the Ferrari 488 Pista.
8 photos

Though society frowns upon it and whoever does it is promptly called out, the desire to show off, brag, parade, display ostentatiously or whatever else you want to call it, is inherent to human nature. It’s also innocent, unless you’re doing it for clout. Like this poor dude and (former) owner of a brand new Ferrari 488 Pista.

The video at the bottom of the page was posted online by mrexumas, RoadAndTrack says. Since it’s footage from inside a secondary car at the site of the accident (in the Netherlands), it’s probably a friend of the Ferrari owner. He, the Ferrari owner, had only gotten the car one day before the events shown, and was, most likely, out to shoot video to show off. Show off his brand new car and his skill in driving it.

The video is short, but it is nonetheless a sad lesson in cockiness. Think of it in terms of “check yourself before your wreck yourself” in automotive terms: the driver clearly had not the skill or the knowledge to handle such a powerful machine without its safety features, like traction control and stability control, yet he still disabled them.

Not knowing what would happen and what to expect, he seems to have turned off traction control, downshifted gears and prepared to hit the throttle hard. It would make for great camera action, he presumed. And it could have, had he been able to handle all that power (710 hp going to the rear wheels) from the twin-turbocharged V8. Instead, he lost traction and slid to the left, which is when he overcorrected and lost control.

The 488 Pista went sideways to the right, mounted a curb, slammed through what looks like railing or a metal fence, and stopped among the bushes, after spinning a couple of times. The good news is that no one was injured. The bad news is that the Ferrari took considerable damage; the aforementioned media outlet notes that at least one airbag deployed.

The takeaway is that cockiness can be expensive and ego-bursting. Show off if you must, but only when you know you can handle a modern supercar. 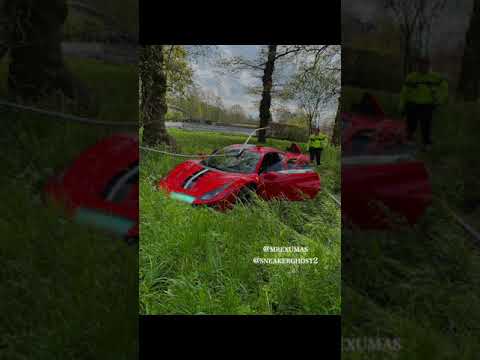