2 Blue Origin Spaceflight Requires One Hell of a Fit Body, Here Are the Specs

3 5,000 People Bidding Millions of Dollars to Be Flown to Space by Jeff Bezos

5 Jeff Bezos to Start Selling First Seats on New Shepard Spacecraft on May 5
Car video reviews:
Up Next

About a month ago, the highest bid for a seat on Blue Origin’s first crewed flight to space was $2.8 million, and there were at the time some 5,000 people who had bid for the honor. That number stayed up there for a very long time, until it miraculously morphed into ten times more, $28 million, this weekend.
21 photos

It was on June 12 that Blue Origin concluded the bidding process (video below), and said at the end of it all it saw no less than 7,600 fighting for the honor of spending a few hours cooked inside a space capsule with Jeff Bezos himself, and his brother Mark. The highest someone was willing to pay was according to Blue Origin $28 million.

The identity of the winner was for now not revealed (it will be in the coming weeks), but we are told that the huge amount of money paid for the trip will not be used by Blue Origin itself. Well, it will sort us not be used, as it will be going to the company’s Club for the Future foundation, a group aiming to speed up exploration and life in space by drawing new blood into the industry.

As for the space flight itself, it is scheduled to take place on July 20, marking the first time ever when civilians (they like to call themselves tourists) are going to space. Or, to be fair, to the edge of space, 328,000 feet (100 km) high, where the crew of six will spend approximately 11 minutes.

The rocket taking them up is the New Shepard, and the capsule aptly called Crew. The separation of the two components will take place at 220,000 feet (67 km), with the capsule moving further up until it reaches the desired altitude. After selfies are taken and shoulders patted, the capsule will head back down to the ground, where it will land by means of parachutes. 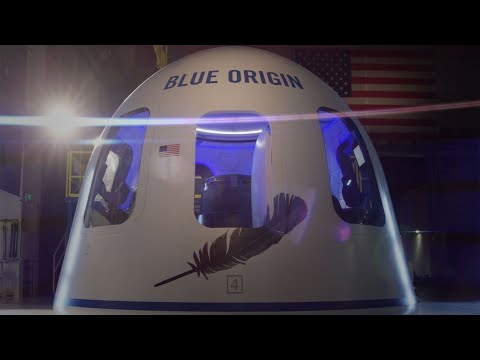