1 The Strict Rules of Ferrari Ownership: You Don’t Choose, Ferrari Chooses You

2 Celebrities Who Got Banned from Buying a Ferrari

5 Guy Tracks Down His 1973 Ferrari 246GT Dino, Buys It Back, Now He Sells It Again
Car video reviews:
Coverstory

On Enzo’s Birthday, a Ferrari F40 Spontaneously Burned to a Crisp in Monaco

One could say that this F40 went out “in the most Ferrari way possible,” but boy, what a disheartening sight it makes.
6 photos

On February 18, precisely on the day in which Enzo Ferrari was born 122 years ago, in the town of Modena, Italy, an expensive classic Ferrari spontaneously caught fire and then burned down to a crisp in a matter of minutes.

It all happened on a quiet street in Monaco, close to residential buildings and, because this is the world we’re living in today, there is an abundance of videos and photos on social media. In one of the videos, also available at the bottom of the page, you can even see a man – supposedly the owner – raising his arms above his head in total frustration at seeing $1.4 million going up in smoke. Literally so.

At first, the flames are small but it’s only a matter of seconds before they engulf the entire rear of the car. It appears that the source for the fire is near the engine compartment, which is placed behind the passenger’s seat. As the fire spreads, plumes of dark smoke envelop everything else.

Hilariously, a resident on the building right next to the burning Ferrari, is seen later on the balcony, above the fiery car, spraying it with what looks like a garden hose. Talk about having one’s heart in the right place, bless him.

Photos of the aftermath of the fire have also been made available on social media, and they paint a sad reality for the owner, whoever he might be: more than half the car was completely consumed by the fire.

As for those saying it’s stupid to get yourself an expensive car (or any other car, for that matter), and not make the common-sense purchase of a fire extinguisher, think of it this way. Given the size of the fire, a portable fire extinguisher would have probably helped as much as that guy with the sprinkler did in the grand scheme of things.

So, today, one day after Enzo’s 122nd birthday, there is one F40 less in the world. Which means the individual value of the remaining F40s has gone slightly up. 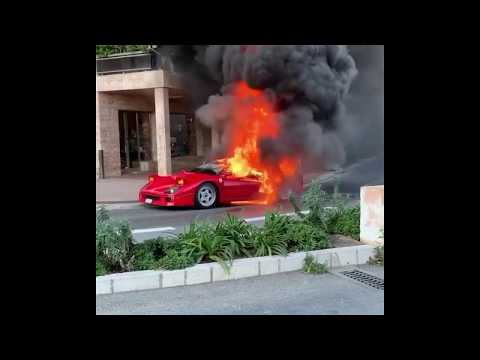