4 World’s Most Expensive Superyachts, Abramovich’s Eclipse and Solaris, Moving Out of Reach

5 Russia Seizes $10 Billion Worth of Foreign Planes Under New Putin Law
Car video reviews:
Up Next

Ford's Drift Mode Might Come Back, Here's the Patent for It

Named after Scheherazade, the legendary Persian queen from One Thousand and One Nights, this Lurssen build is the 12th largest superyacht in the world. Delivered to the owner in the summer of 2020, it remains, to this day, shrouded in mystery and controversy.

On Board the Mysterious $700 Million Scheherazade, Where Every Screw Is Gold-Plated

Scheherazade is a gigantic superyacht, a six-decker that stands out for impressive performance, its supposedly excessive amenities, and the fact that it’s the only vessel in the world of this size to not have a publicly-known owner. Some reports claim it belongs to none other than Russian President Vladimir Putin, while others say that it’s the property of Russian oligarch and CEO of Rosneft Igor Sechin, whose Crescent superyacht was seized by Spanish authorities earlier this month. Others say that the owner is a middle-eastern billionaire with no ties whatsoever to Russia.

Whoever the owner is, he certainly does have expensive and quite outrageous tastes. Because Scheherazade is one of the most impressive and probably most expensive builds of recent years. Currently dry-docked in an Italian port, at 459 feet (140 meters) in total length and a massive interior volume of 10,167 GT, it’s also among the largest ever.

The reported cost for Scheherazade is $700 million, but a new report in The Sun notes that the final tally might over $991 million, if you add in all the extra work that was done after it was launched for sea trials in 2019. The six-decker features very little exterior space on considerations of privacy and because it’s made for sailing in warmer climates. As such, most of the stuff that’s on board is shielded from prying eyes, but the British tab has obtained photos of the interior – and it’s as lavish as reports have said it was. You will find them in the video at the bottom of the page.
Previously known as Project Lightning, Scheherazade is based on Lurssen naval architecture, with an exterior design by Espen Oino and interiors by Francois Zuretti. It has a steel hull and an aluminum superstructure, and six decks that can offer accommodation for 40 guests across 22 cabins, and 94 crew. Powered by twin diesel 8,837 hp MTU engines, Scheherazade can reach top speeds of 20 knots (23 mph / 37 kph), and cruises comfortably at 15 knots (17 mph / 27.7 kph).

Since this is a custom build, these are all the official details released by the shipyard and / or spotted by superyacht watchers. Well, these and the fact that Scheherazade has not one but two helipads, one at the bow and one at the stern, with the former opening up to lower a helicopter into a hangar. Also here are all the water toys, including five tenders, six jet skis, and eight sea bobs.

The list of amenities is of the kind that would make an oligarch’s day, including gold fixtures in all the bathrooms, and only gold-plated screws over a sea of marble and expensive glazing, at least according to the same media outlet. Clearly, when you’re as rich as whoever paid $700 million for this superyacht is, you simply can’t go number one or two on a regular toilet: only gold will do.

A tiled dancefloor lowers to become a pool at the press of a button, and this is believed to be one of such two floors in the world – with the other to be found on Putin’s Graceful superyacht. Also on board, there’s a private movie cinema and a lounge with the world’s biggest TV found on a yacht – stretching 4.5 meters (14.7 feet) across an entire wall, which cost over $1 million just to install.
There’s also a 5-meter (16.4-foot)-wide aquarium, a mobile hospital unit, an entire section dedicated to a spa and wellness center (which includes Turkish, Roman and cold baths, cryotherapy and hydrotherapy), a fully-equipped gym and a judo studio, a formal ballroom, several pools and jacuzzis, and multiple entertainment areas. “Every surface is marble or gold,” a worker on the superyacht says for the publication. “It’s like a mini city.”

The owner’s suite is located on the upper deck and actually consists of two suites, a his and a hers unit. They each have separate bathrooms, walk-in wardrobes, studies, and dressing rooms.

With privacy and security at the forefront in this build, it would probably make sense for Scheherazade to have a special security system able to shoot down drones, which reports say it has. Scheherazade is managed by Monaco-based Imperial Yachts, but flies under the Cayman Islands flag, where the owner is listed as Bielor Assets Ltd, an anonymous entity registered in the Marshall Islands. Since delivery, it sailed only to Hurghada, Egypt, and to Sochi, Russia, before docking in Marina di Carrara, Tuscany, where authorities have launched an investigation into its ownership to see if it falls under the current sanctions imposed against Russia. 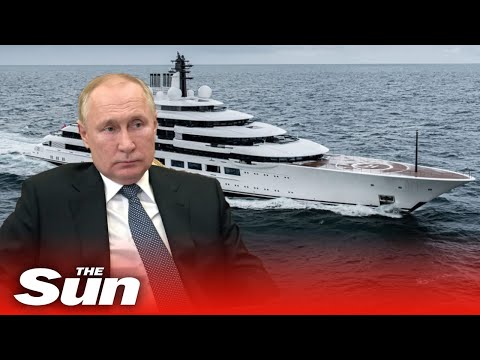 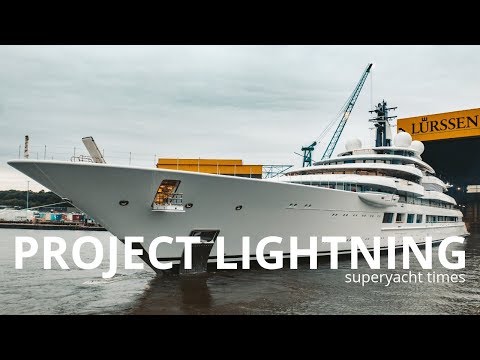 Besides Its Rocket Fleet, SpaceX's Recovery Ships Are the Envy of Any Space Agency