4 Tommy Hilfiger Parting With His Iconic Star-Studded Superyacht, Worth $46 Million

On Board the $66 Million Quantum of Solace, the Most Luxurious James Bond-Inspired Yacht

Some millionaire James Bond fans track down and buy rare Aston Martins, either those used in the film franchise or good replicas. For John Staluppi, car and business magnate, and an experienced yacht builder himself, a car won’t suffice. If there’s a record for the biggest James Bond fan in terms of how many yachts you own named after the installments in the series, he gets it.

As of the time of press and over the course of three decades, Staluppi has owned over 21 yachts named after the films in the James Bond series. His most recent, Quantum of Solace, is now for sale, as he’s decided he wants something different. Quantum of Solace is going for $66 million and was on display at the 2021 edition of the Monaco Yacht Show in September, in the hope of securing a buyer. It’s yet to do that but, when it happens, the buyer will effectively be able to bring some of those James Bond fantasies to life.

The one thing that sets Staluppi apart from other superyacht owners, aside from an almost unhealthy obsession with James Bond, is his perfectionist streak. The man knows what he wants from a boat and how to get it and, in the process, how to make it perfect. His second yacht, Octopussy, is officially the fastest one in the world, with a top speed of 61 mph (98 kph); the 2004 build, and his personal favorite, World Is Not Enough came close to taking that crown, with 77 mph (124 kph) on paper; sadly, it was never able to deliver on the promise due to technical issues.

Staluppi bought Quantum of Solace in 2019 after falling in love with it and upon hearing it was one of the four superyachts in the world to have a double-height atrium inside. Launched by Turquoise Yachts in 2012, the vessel had already gone through a drastic restyle and refit with H2 Yacht Design. So, its appearance was already more in keeping with the image of the famous spy, with the former ample curves on the superstructure replaced by sharp and more aggressive lines.

Quantum of Solace provided Staluppi with something he was looking for at the time: more space, more stability, and a higher degree of comfort. You know, just in case you were wondering why he’s selling it. At the time, it was the right choice, so Staluppi and his family spent weeks on end on board during the first round of lockdowns, enjoying themselves. Now that he’s decided he wants something different – he’s not saying what for the time being – someone else can have it.

With a total length of 238 feet (72.6 meters) and four decks totaling a volume of 1,730 GT, Quantum of Solace offers accommodation for 12 guests in seven cabins, and 17 crew members in separate quarters. The guest cabins, including double rooms for children with attached nanny rooms, are all located on the main deck. The owner’s suite is up top, and includes a giant master bathroom decked in marble and onyx, his and hers walk-in wardrobes, a private office, and private terrace.

Furnishes are incredibly elegant and rich, as one would expect from a James Bond tribute yacht. Despite the association, there aren’t that many 007 references onboard, so it’s not like you’re walking into a boy’s shrine to the world-famous spy. But the air of sophistication and custom luxury prevails and is noticeable, from the art pieces throughout, to the rich combination of wood and plush carpets, backlit stone, glazing and chrome finishes.

Amenities include a spa below deck with a massage room and a gorgeous sauna, as well as a fold-out platform that bring guests directly to the waterline. Up on the sundeck is a 16-foot (488-cm) counter-flow pool and outdoor lounge area, a bar and a DJ booth, and a touch-and-go helipad for an EC 135 standard or similar.

Matching tenders sit in the lateral garages, equipped with cranes and hydraulically activated doors for easy launching and retrieval from water. To these, you can add several formal and informal dining areas, both indoors and outside, a private cinema, a small concert hall, and more socializing areas than you can count on the fingers of both hands.

Lloyd’s-classed and MCA-compliant, Quantum of Solace is powered by twin 2,447 hp Caterpillar engines capable of taking it at a top speed of 17 knots, and a cruising speed of 15 knots. At 12 knots, it has a range of 7,000 nautical miles. 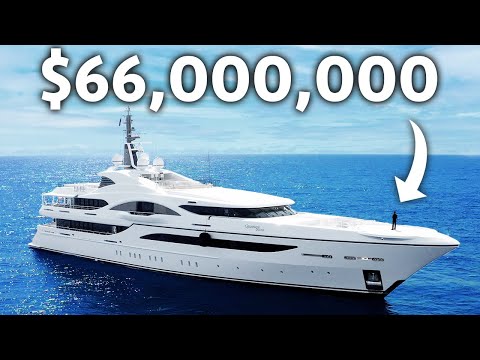 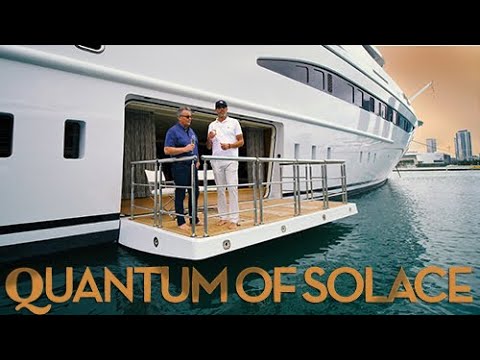