3 Construction Resumes on Seized $600 Million Megayacht Dilbar, but No One Knows What For

If you like to think of ships in terms of a “she,” Skat is the ultimate boss lady. She is smart and highly-competent, she is beautiful and gracious, but she is also the kind you don’t want to mess with.

Some ships are designed to evoke speed even at anchor; others are gigantic floating palaces that make no attempt to hide the kind of luxurious features offered inside. Most superyachts, though, look as if they’re “carved out of soft cheese” – at least to billionaire Charles Simonyi’s analytical, mathematical gaze. To counter this trend, he wanted a superyacht that looked exactly like what it was: steel and aluminum used to build a floating home.

That floating home is Skat, launched by Lurssen in 2002. It’s no longer Simonyi’s home, having sold it at the end of 2021 for an undisclosed amount (estimates of its value put it at $60 million), but it remains one of the most instantly recognizable and memorable vessels of modern times. Though it was not designed to be innovative, it ended up incorporating several industry firsts – including the unusual, military-inspired naval architecture.

The brief for Skat, which had actually been shopped around to several shipyards before it was picked up by Lurssen, called for a yacht “pas tout à fait comme les autres,” a yacht unlike any other. A very simple phrase at first look, but one that brings up incredible challenges. Simonyi is a software architect whose work includes development for Excel and Word at Microsoft, with a very analytical mind. It’s no wonder, then, that he turned to geometry for his yacht, which he said he imagined as a continuation of his home and his private jet. He wanted a seamless transition between the three.

The result was a 70.7-meter (231-foot) superyacht with a distinctive silhouette, the kind that hadn’t been done until that moment. Skat, which is an endearment term in Danish and means “treasure,” was designed for comfort, despite its aggressive stance, so it has a full displacement hull and 1,982 GT of interior volume. For maximum comfort for the guests, Lurssen strayed out of its own comfort zone, and elastically-mounted everything that produced noise and vibration, from the engines to the air compressors, the generators, and the watermakers.

Painted in dull gray, with a steel hull and aluminum superstructure, Skat has a very high bow and a faceted superstructure with expansive glazing – yet another first for Lurssen, and for the industry as a whole at the time.

The naval architecture is by Lurssen, with the exterior by Espen Oino (9906 on the hull of Skat stands for Oino’s six design in the year 1999), and interiors by Marco Zanini and Flavia Alves De Souza. Simonyi himself was very involved in the project, though he initially said he would only consult with the team on occasion. As the project moved along, he ended up visiting the Bremen shipyard in Germany at least once a month, and in the process, helped birth a yacht that is “dominated by planar surfaces, straight lines, and angular corners.”

Put it differently, Skat is almost brutalist in styling: sharp and multi-faceted on the outside, and minimalist on the inside, with countless industrialist touches. With all this, it’s not un-welcoming, and that’s perhaps its most noteworthy accomplishment: while Lurssen takes pride in building a ship that is all corners and sharp edges, the interiors came out elegant and comfortable.

That’s because De Souza used the same gray colorway as a sort of background for Simonyi’s personal art collection and contrasting pieces. Art pieces include pop art by Victor Vasarely and Roy Lichtenstein, set against solid sheets of Wilsonart laminate and gray granite. Isolated furniture pieces provide much-needed contrast: a comfortable chair in bright red here, another settee in navy blue there, a carpet that breaks the monotony of a room.

It helps that Skat uses unprecedented amounts of glazing, too. The conservatory on the bridge deck is almost encased in glass, offering 270-degree views of the surroundings, thanks to semi-hexagonal windows. Again, the goal was not to break records and set a new trend, though both ended up happening, but to allow natural light in and thus offer a respite from too much industrial gloom.

Accommodation on board is for 12 guests and 19 crew, and amenities are top of the range. They include the open-plan bridge deck with multiple functionality, a helideck (the first Lurssen ever put on a yacht), gym, beach club with dive store, a library, a cinema, several formal and informal socializing spaces, and a generously-sized garage for the toys.

After its public debut, Lurssen admitted that Skat was “hard to make perfect,” the kind of project that posed a new unexpected challenge every step of the way, down to the paintjob on “those hard unforgiving surfaces” of the hull. But it was just that: perfect. Twenty years on, Skat remains the kind of vessel that is memorable, if not as shocking a sight as then – whether you like it or not. 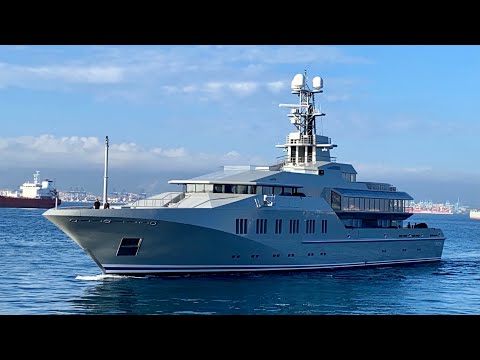