3 1961 Holiday House Geographic Model X Was the Trailer for the Rich, a Futuristic Unicorn

On Board Justin Bieber’s $2 Million Prevost Tour Bus, a Penthouse on Wheels

No one knows that better than Justin Bieber, a pop star who has been around, performing at sold-out arenas around the world, since he was 15 years old. So, in anticipation of what should have been his Changes 2020 Tour, he gave himself the gift of a home away from home.

We’ve covered Bieber’s tour bus on a couple of instances before, after it was spotted glamping in Utah and then visiting the California State Prison of L.A. County, where the pop start told inmates how finding God helped bring him back on the right path. At the time, it was not known that some of the photos available on the Marathon Coaches website, which had built the conversion for him, were actually from inside Justin’s RV.

Today, as Bieber prepares to actually take his tour bus on tour (the Justice World Tour kicks off this month), it’s time for a more in-depth look at it. With a reported price tag of $2 million, it’s a Prevost Bus Conversion by Marathon Coaches, with two slide-outs and the kind of luxurious styling and amenities you’re more likely to find in a penthouse than, you know, on a bus. After Bieber opened the door to his RV to GQ Magazine last year (see the video below), this is exactly how the publication described it: a penthouse on wheels.

It’s a most fitting description, as you’ll see. Even though it’s not at the top of a high-rise and it sits on just one level, the RV is absolutely gorgeous. It offers a lounge area with a flat-screen TV and a sofa that can fold out, either to sleep two more or to offer more legroom to the two permanent residents, as they “chill” in front of the TV. A fake fireplace adds that cozy feeling to a space that can already be described as very homemansion-like.

On the opposite side is an office area slash workspace, where Justin usually checks his emails and keeps in touch with his friends and business associates. Behind this area is a small dining nook, with an L-shaped couch that can seat four and a table. The kitchen is next to the living, but Justin clearly spends too little time here to talk about it. However, we do know that Marathon Coaches usually furnishes the space with high-end appliances, including oven and burner, life-size refrigerator, sink and generous counter space.

The bathroom is one of the highlights of the RV. Separated in three distinct sections, it offers his-and-hers sinks with plenty of cabinets and storage space, a shower with seating for two and a steam function and, separately, an infrared sauna. More than the fireplace, the sauna is what Justin loves best about the RV. “When I’m on tour, I gotta make sure I keep my body on an optimal level,” he explains. “There’s so much that goes into touring, it’s really hard on your body. You’re doing, like, an hour and a half show a night, which is similar to a professional athlete.”

The bedroom is where Justin sleeps, he says several times, as if there could be any doubt about it. It features a king-size bed that looks incredibly comfortable, plenty of storage for clothes, and mood lighting. LED lighting is available throughout the RV, in fact.

Based on the video below, you’d be excused if you thought Bieber is either not very enthusiastic about his own tour bus or not particularly acquainted with it. In reality, he’s lived in it more than he would probably have if the Changes 2020 Tour had gone ahead. It was postponed with the debut of the international health crisis that year but, since he already had the bus, he and wife Hailey Bieber drove it from Canada to Los Angeles, and then throughout the U.S. on a holiday. Actually, it was driven for them: as Bieber says, it would not be a good idea if he got behind the wheel of the thing.

Bieber’s tour bus also comes with heated floors, marble countertops, hardwood cabinets, plush fabrics, and Bieber’s favorite pieces of Joe Termini’s art, including the Cash Only Mona Lisa, which he describes as his all-time fave. It’s luxurious and fancy but, to Bieber, it’s a “good creative space” – even though he admits he hasn’t done any writing on it.

Compared to other celebrity RVs, this one feels almost subdued, especially given its reported price tag of $2 million. But Bieber isn’t into comparisons. “There's something about being in your own comfortable safe environment that makes you feel comfortable and safe,” he grins. Indeed. 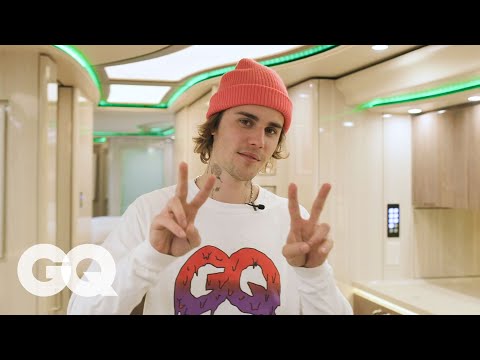