1 Bill Gates Shops for Land for a Sustainable Farm, While Cruising on a Superyacht

Bigger isn’t always better or suitable for all occasions. For some quiet downtime with the family, even a multi-millionaire like George Clooney will want to keep it small and cozy.

On Board Alani, the Elegant Yacht That George Clooney Uses for Family Fun Time

George Clooney is now in Australia, filming his most recent movie, Ticket to Paradise, with Julia Roberts, in the Whitsundays Islands. Because spending months apart from the family while working on a new project is not good for family life and, most importantly, because Clooney is worth an estimated $500 million and he can afford it, he’s brought the entire family along for the ride.

According to reports in the British press, Clooney is staying on Hamilton Island at the Papillon mansion, a seven-bed, seven-bath mansion designed by renowned architect Chris Beckingham. Shooting is taking place on Whitsundays, so Clooney is chartering a yacht for transportation to and from work while alternatively using it for short cruises with the family. Who said anything about not wanting to mix business and pleasure?

That yacht is the Sunseeker MY Alani, an 82-footer (25 meters) that’s primed for fun times and relaxation. It’s chartered out of Whitsundays for the equivalent of $46,000 a week, but for this kind of money, you get the full package, including fuel allowance and port taxes, among other stuff. Unlike most celebrity yachts, Alani is tiny by comparison, but considering Clooney is traveling with his wife and two young children, it’s the perfect – and most elegant – solution.

Alani was built in 2003 and has been offered for charter for years. It's a sleek and relatively small motor yacht powered by Caterpillar engines that take it to top speeds of 24 and a cruising speed of 12 knots. It offers overnight accommodation for six guests and three permanent crew. Still, it can host a party as large as 18 in an elegantly furnished formal dining room. The interior is by New York designer Alan Wanzenberg and stands out for the relaxing combination of whites, browns, and marine blue.

Guests sleep in three cabins, a master bedroom, a VIP suite, and a double cabin, and each gets its own ensuite bathroom. Additionally, the master bedroom and the VIP come with walk-in wardrobes and relatively more space.

Alani charters with trained staff as part of the package: the captain, a stewardess, and a chef who will work with the guests to create custom menus that cater to all needs and preferences. There’s a professional galley for the guests right next to the dining room, which means you get to enjoy the spectacle of seeing your food cooked as much as you will (probably) enjoy the food itself. A wet bar is available on one of the sun decks.

Because Alani was built for fun, it offers ample deck space, both at the bow and aft, including a lounge on the flydeck and a swim platform that can accommodate a hydraulic deck, with docking space for some of the water toys. Also, because it was built for fun, it comes with plenty of water toys, but they're not included in the weekly charter fare. Still, if budget allows, you can get anything from an inflatable water slide, stand up paddleboards, snorkel gear, jet boots, splash mat, and sea jets.

By now, you may have grown so accustomed to celebrities’ super- and mega-yachts that Alani could actually seem a… lesser boat because it’s smaller and less lavish. Nonetheless, it stands out for its elegance and coziness, the perfect Sunseeker that works just as well for sea adventures and relaxing family vacations. 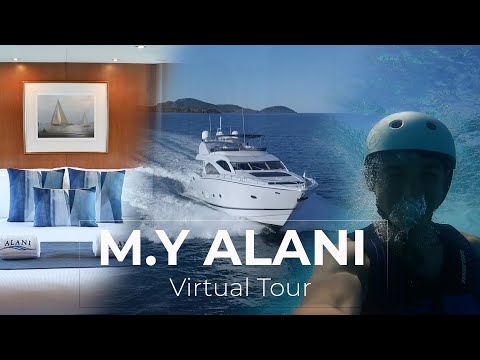