1 TAG Heuer Had Cristiano Ronaldo Designing this Formula One Watch

This Crusty 1950 Cadillac 62 Deserves a Second Chance and a Loving Home, Will It Be You?

Just when we were stating that everybody should try to stay original and create authentic products instead of getting too much inspiration like the Chinese sometime do, here we are writing about a true work of art that proves our statement. Since one of the astronauts involved in the Apollo 11 mission wore an Omega timepiece during the mission, the Swiss have decided to release a limited edition celebrating the event we just have to talk about.
6 photos

Omega is a Swiss luxury timepiece maker renown for being the company chosen by the armed forces of Britain’s Royal Flying Corps and by the American army back in the day.

Famous for its precision, great craftsmanship and high performance, Omeag appears to also have something in common witht space traveling, since Buzz Aldrin had an Omega Speedmaster Professional chronograph strapped during the famous 1969 mission when human beings set foot on the surface of a celestial body for the first time.

The Omega Speedmaster Professional Apollo 11 45th wristwatch commemorates the first lunar landing and celebrates its link to the iconic chronograph that was part of the adventure. Recalling the colors of the moon and the Apollo 11 lunar and command modules, the limited-to-1969-units edition features a 42 mm completely brushed case that has a touch of gold.

According to its maker, the case is crafted from lightweight grade 2 titanium, also inspired by the outer space mission, since the Moon is covered by troves of titanium ore. Moreover, the black PVD dial has been produced using a special laser which creates the design elements on the watch’s face by removing the material surrounding the name, sub-dial numerals and hour markers.

The indexes and hour, minute, seconds and sub-dial hands are crafted from 18K red gold, while the central chronograph hand is red gold-plated. To keep things in the same temper, the anniversary timepiece was built using a special model strap. It’s a brown coated nylon fabric “NATO” strap which is inspired by the robust types that have equipped the watches issued to military personnel since the Second World War.

PS: the timepiece was unveiled last year, but since we recently had the nice Solar eclipse we simply felt like talking about something space-related 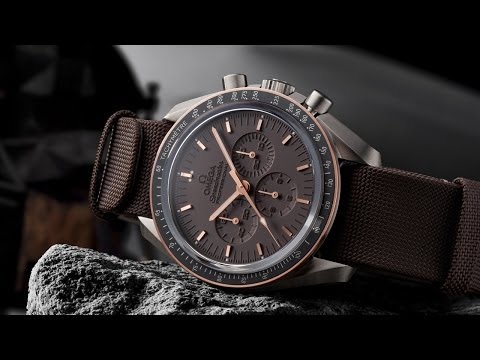