5 Turbo and Nitrous Toyota Supra Drags Mustang and Old Camaro, They're Very Close
Up Next

Waze Police Reports Could Be Banned in One More Country

Aurel Niculescu
Anyone familiar with quarter-mile racing knows very well that spirits can easily run rampant on and around the drag strip. But there’s a harmless and easy way to settle any grudge: a quick race.
11 photos

We have seen a lot of drag racing events organize “grudge races” as appetizers for the main events. The quarrels may or may not be real, but it’s a very cool way to showcase one’s ride, test the latest setup one more time, or (obviously) blow off some real steam.

And it doesn’t take a huge quarter-mile facility to get in on the action. Even an intimate little-town drag strip that doesn’t even have the traditional ET and trap speed clocks – just a portable Christmas tree – will suffice. Actually, as the setting allows all onlookers to partake in the action, it could be argued that grudge races are even more heated in such cases.

This is particularly true with the recent video (embedded below) provided by the Jmalcom2004 account on YouTube, which sees a debate that’s about to boil over. It took place over a large period (the videographer mentions a couple of weeks between the argument and the actual race), so it’s crystal clear these folk meant business.

They even chipped in to make this grudge race even more interesting with a massive $20k winner’s pot. Well, it might not sound much when considering the millions of dollars poured in by professional racing teams, but when you consider the intimate small-town setting and the fact that we’re probably dealing with hard-working people here, it’s still a rather hefty amount of cash.

Beware, this is one feisty video, sometimes riddled with “explicit grudge content” as the videographer warns. So, just in case the big argument isn’t that important, and one wants to focus on the actual race, we suggest jumping to the presentation part (at the 10:04 mark) or directly to the race itself, which finally kicks in at the 12:33 timestamp.

By the way, our eager contestants have lined up an all-motor big-block Chevy Malibu (fourth generation, by the looks of it) in the left lane, as well as a nitrous-fed Oldsmobile Cutlass (fifth-gen, if we are not mistaken). And for all the harsh words thrown around, the race itself wasn’t all that spectacular. It was simply because the Cutlass jumped out of the starting block like a bullet while the Malibu had a completely botched attempt. In the end, we did hear some hints about a possible rematch. 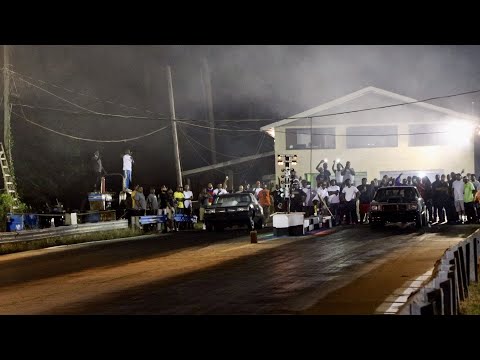