3 How Famous Volkswagens Got Their Names

The Crew On Board Russian Gold Tycoon’s Superyacht Refused to Sail With U.S. Authorities

Old VW Passat Beats the M Out of the BMW M3, Takes On Porsche 911 GT3 RS and Turbo S Next

Cristian Gnaticov
On the road, this old Volkswagen Passat wouldn’t turn that many heads, though enthusiasts would definitely notice the clean looks and special wheels. At a drag racing event, however, such as the Race1000 in Germany where it was filmed, things are quite different.
9 photos

Rocking a five-cylinder engine under that classic hood, with a big turbocharger assisting it, it has in the region of 700 horsepower available via the right pedal, the video uploader claims. By the looks of it, a manual transmission is responsible for channeling the thrust to the wheels.

Eager to further prove its worth, the old-timer then lined up at the start line next to something a bit more exotic: the Porsche 911 GT3 RS. Part of the 991 generation, it has some 200 horsepower less than its ad-hoc rival, though the 0 to 100 kph (0-62 mph) sprint is dealt with in a little over 3.0 seconds. So, how did it do against the go-fast Volkswagen? Well, not that good actually, as it turned out to be a bit slower than the BMW M3 mentioned above.

Before calling it a day, the Volkswagen Passat in question managed to attract even more attention by taking on a Porsche 911 Turbo S. A full-blown supercar, part of the new generation 911, the 992, it is capable of hitting 100 kph (62 mph) in 2.7 seconds, and rocks a 650-hp engine. We won’t spoil the outcome of this race, as you definitely have to watch the 4-minute long video shared below if you’ve made it to this point. 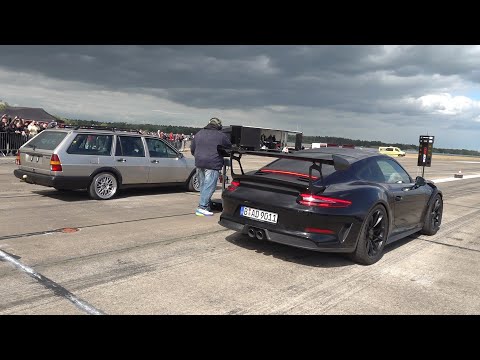