4 Care For Some Car VS Bike Canadian Road Rage?

Old Suzuki Motorcycle Powers A Tractor In The Netherlands

We all know the Volvo-powered tractor and the terror it created when its owner gave it a spin on the fields. Well, a Dutch farmer decided he’s going to do the same thing to his agricultural aggregate, but with a twist.
4 photos

Instead of using a big, heavy car engine, the man decided to plant a motorcycle inline-four in his Fieldmaster tractor. We don’t have the exact specifications but is seems to be coming out of an old Suzuki sportbike.

The video’s description points out at an 80 hp unit, though, which should also give just about over half of that number in Nm of torque. The rest of the tractor looks to be homemade as I’m pretty sure that box frame isn’t coming as standard.

However, unlike the Volvo-powered one, it is really confusing to hear a motorcycle engine revving when this abomination starts up. Especially when it has to be revved hard to move the machine. The transmission and the differential look stock on the tractor, so you can imagine the reduction on that thing is fabulous.

At first, you won’t believe it will move, but towards the end of the video, the farmer really opens up the taps and the machine stars darting across the farm land. Not as fast as the previous example, but it goes.

Guess it won’t be able to plow the fields or pull a trailer filled with corn, but in our book this still counts as cool. I can only wonder how it would pull with a supercharged Kawasaki Ninja H2 engine. Or maybe a 1,200 cc Harley-Davidson V-twin, since it has more torque.

Anyway, enough with the chit chat and check out the video below. The clip is actually from last year, but it is now that it is starting to get noticed on the Internet. 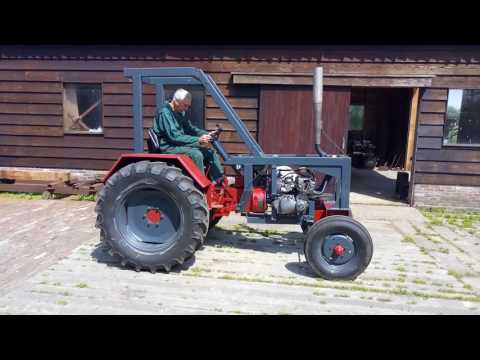