Mister Regular flew all the way to Britain, and guess what kind of car he jumped into? An old Peugeot 206 with a diesel engine (and an old Rover, but that's not in the video).
4 photos

Not many Americans even know what Peugeot is, yet he says he always thought the 206 was cool, and would buy one if given a chance.

This is technically a B-segment car, though it's not that much bigger than a Fiat 500. Back when it came out in 1998, the 206 quickly became a style icon with European consumers, and Peugeot also developed a sedan, coupe-cabriolet, and wagon.

It stayed in production right until December 2012 in Europe. But China kept it until 2015, Brazil until 2014 and a factory in Iran still makes the 206.

The point we're working towards is that this could actually be the most successful small car of modern times, with 9 million sales in total. Sure, the VW Polo has 12 million sales, but they are spread over five generations. And the fact that it's still on the road proves Peugeot reliability is way better than the snobs say. Can you believe this particular car was driven for five years without an oil change?

One of the first comments he makes is about the two holes on the right side of the hood, which he thought were engine air intakes but lead nowhere. We've heard other people saying that they're connected to the air conditioning external air inlet, but they could just be decorative.

Light conversation is made about deactivating airbags, the lack of manuals in America and the VW Rabbit. But it's the super-light clutch that Mr. Regular is mostly pumped up about. But the fact that the 206 has plenty of quirks doesn't necessarily have to do with it being French. Most cheap cars had the window switches and the lock button on the dash. But we haven't heard about a steering column rubbing against your clutch foot before. Maybe that's like a RHD market thing. 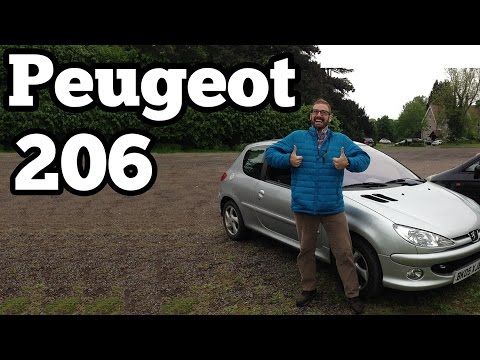