2 Doug DeMuro Tests the 2021 GMC Yukon Denali Diesel, Is Surprised by the Engine

Old GMC Yukon Goes Like a Bat Out of Hell, Mustang Boss 302s Can’t Keep Up

Ever seen an old GMC Yukon beat the hell out of a Ford Mustang Boss 302? Well, you are about to, as it took on not one, but two such pony cars.
7 photos

The older iteration Fords lined up at the start line next to the SUV, with their owners likely confident that they can cross the finish line first. Despite the bland looks, though, this isn’t a stock GMC Yukon, and you don’t have to be addicted to petrol fumes to tell that it sports many mods.

Now, as for what those are exactly, your guess is as good as ours, yet it is clear that it doesn’t have anywhere close to the 290, 300, or 329 hp produced by the 4.8-, 5.3-, and 6.0-liter V8, respectively. Even with the punchiest version of the power unit, it still needed around 8 seconds to hit the 60 mph (96 kph) mark back when it was still new, which wasn’t impressive then as it isn’t now, considering that we have hatchbacks that are twice as fast.

Feeling proud of the achievement, the owner of the GMC Yukon thought that maybe the tuned high-rider has what it takes to put the big bad Dodge Challenger SRT Hellcat Redeye in its corner too. But this is a true performance model built for such races, and therefore a worthy competitor to the fastest vehicles on the planet. Still, we don’t know just how powerful the SUV is, so it could literally be anyone’s game. Without further ado, this is where we invite you to scroll down and hit the play button. 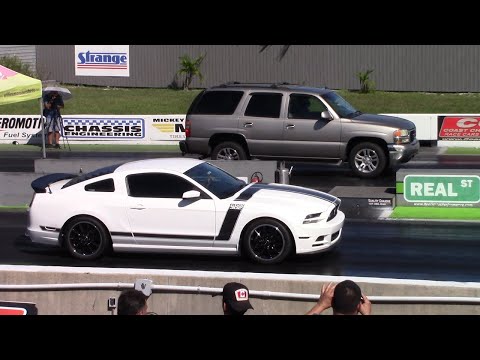